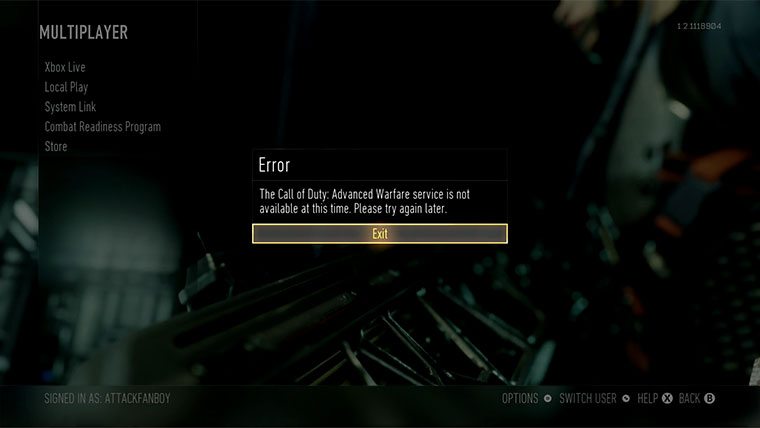 Advanced Warfare might be the most refreshing Call of Duty in years, at least according to reviews, but not all platforms are having a smooth launch.  Competitive multiplayer in Advanced Warfare is apparently riddled with lag on numerous platforms, and users are calling for Activision to provide dedicated servers for the game.

While many have taken to social media, forums, and websites to voice their complaints, the errors that Advanced Warfare players are seeing are many.  In-match disconnections, Call of Duty service not available messages, and general latency seem to be the big problems that many are having when sifting through the growing number of complaints.  Many of the issues being described are from users on the PlayStation 4 and PC versions of the game, two groups that are unfortunately familiar with poor Call of Duty launch experiences.

The good news is that Activision Support has been actively monitoring places Reddit and Twitter, trying to get to the bottom of these many user complaints.  The bad news is, it’s likely that a lot of the in-match connection issues are coming from the decision to use peer-to-peer connectivity — this is not a problem that will be easily solved without dedicated servers.

Though ahead of launch, Sledgehammer Games’ Michael Condrey revealed in an interview that Advanced Warfare would be getting dedicated servers.  Why it launched without them is anyone’s guess.  “We’ve got some announcements coming. Yes, we will be supporting dedicated servers and there will be announcements soon on which providers and platforms. I can’t answer just yet, but you can let your community know that it’s coming,” Condrey revealed in the pre-launch interview.

Neither Activision nor Sledgehammer Games has offered comment on the connection issues at this point, nor have they offered any clarification on when/if Call of Duty: Advanced Warfare would indeed be getting dedicated servers.

Update: Sledgehammer Games’ Glen Schofield has since issued a response to the issues that people are having, and assumedly the dedicated servers that many are asking for. “The full weight of Activision is on the issues. We hear you loud and clear and we want everybody to know we are on top of it,” said Schofield via Twitter.