After The Hype: LA Noire 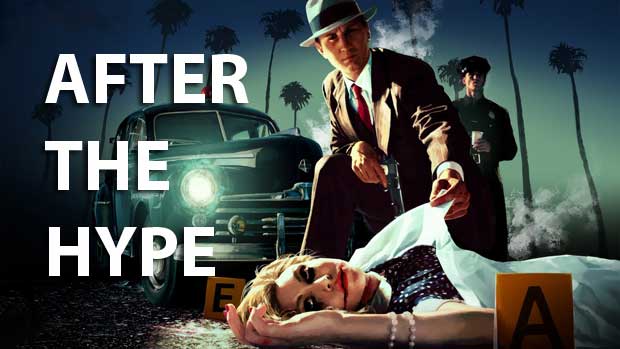 The gritty single player detective game, LA Noire, has been out now for a couple of weeks. Designed with a tip of the hat to the classic film noire movie genre, L.A. Noire takes you through the life of Detective Cole Phelps in his rise through the Los Angeles Police Department circa 1947.  As that new game smell starts to fade, we ask our staff what their impressions are of the latest from Team Bondi and Rockstar.

I can’t say I got caught up in the L.A. Noire hype, simply because after GTA IV and Red Dead Redemption, I expected anything associated with the Rockstar name to be incredible.  Like many Rockstar games of past, I have been slow to get into L.A. Noire.  I love the setting, and the new gameplay focus is a breath of fresh air in a time where I find I am getting a little tired of formulaic games and gameplay (Here is looking at you FPS).  The interrogations are quite interesting, but I admit that I find them a bit of a guessing game at times.  I am obviously no detective.  I also find the pacing a bit slow for what I am used to, but again I welcome the variety in my gaming library.

In the end L.A. Noire is sitting on the shelf while I tear up the roads in the very excellent Dirt 3.  Noire takes dedication and immersion for a proper experience; It is not a game you just pick up and put down.  I am saving this one for the next time I have some real time to commit.  Hopefully I find that time before the next Elder Scrolls and Mass Effect come out…

I haven’t taken a hard look at the game, but LA Noire looks interesting to me, and I will probably get it. The setting and premise are something I have always enjoyed in movies and think it lends itself well to a game. The graphics look pretty high rate, and that is something that always gets my attention”

L.A. Noire isn’t flawless, but it undoubtedly has enough innovation to be considered an evolution in the way we consider this medium as a story-telling narrative. The amount of patience and attention to detail required to progress is definitely one of the game’s selling points. Whether it’s searching a suspect’s apartment for potential clues or interrogating a person of interest, multi-tasking gamers may want to think first before they invest in the purchase. I remember one particular instance in which I was questioning an average run-of the-mill housewife on the whereabouts of her husband. I took my eyes away from the screen to answer a text and when it came time to decide if she was telling the truth, I took the poor middle-aged woman at face value. Well, needless to say she wasn’t being completely honest (after playing this game you’ll think that every citizen in Los Angeles during the 1940’s was trying to get away with something) and I missed out on essential information of the case.  Each and every mannerism and subtle facial expression is the key to a successful interrogation, and believe me when I say that any kind of electronic distraction will hinder your progress through the game.

For all of the things L.A. Noire does right, there are a few things that the developers got completely wrong. Firstly, there’s not a great deal of variety in the cases especially in the early stages. Too many times do you have to chase a runaway suspect on foot until you either tackle them or get help from your partner to corner them. Secondly, the game truly seems too easy at times. Botch an interrogation and the Captain may send you right back in until you get it right. For a game that is so similar in style to Heavy Rain, it lacks what that game did so well: continuing the storyline regardless of the outcome of each individual situation. Lastly, and this one is just a nitpick, is the unnecessary rank that you get after each questioning. Sense that the suspect is fibbing and you gain a higher rank faster, but fail to catch a lie or accuse him/ her without evidence and it won’t go up as quickly. With a game that features a fantastic story and realistic nature like L.A. Noire, it seems out of place to include something like an irrelevant rank. That’s just what I want when I think that my interrogation skills could give Detective Stabler a run for his money — arbitrary experience points to remind me I’m playing a video game.

Though L.A. Noire isn’t for everyone, it is an innovation of gaming that should be experienced at least once. The story and gameplay are creative and fresh enough to engross players for hours on end. Chances are we’ll look back on this game in due time and credit it as a groundbreaking advancement of the gaming world in an industry that strives to be more than simple interactive entertainment.

After missing out on the craze that was Red Dead Redemption, I figured it was important that I picked up LA Noire. I’ve never been that big of a follower of the GTA franchise but have put a good chunk of time in GTA IV so I had a preconceived notion of what to expect. That notion was thrown out the window when I popped in LA Noire. I was amazed by the beautiful facial animations, voice acting, and landscape that encapsulated the ‘40s. Everything from the gunshots to the outfits, or even the diction, I felt like a small character in a much bigger setting. LA Noire is an amazing experience that will have your expectations raddled with shock; a must play.

LA Noire was a fantastic experience and I’ll leave it at that.  In fact, I think both Rockstar and Team Bondi should leave it at that as well.  What made LA Noire so good, is that it was unlike anything anyone’s ever played.  It tackled a mature storyline, driven by a well penned narrative, but the nuances of the game aren’t something I see myself wanting to play through again.

I think that Team Bondi could put together just about anything with a remotely believable story, couple it with the motion capture technology, and have a game that is light years ahead of their competition.   I’m excited to see what they’ll do with it, as long as it isn’t LA Noire 2.  I’m even more excited to see these guys rewarded for taking a risk on both the tech behind the game, and the premise, which can only lead to good things for the industry going forward.

You can also find our official review here: LA Noire Review.  What did you think of LA Noire?  Was it all it was hyped up to be?  Let us know in the comments section below.