The latest news in the world of video games at Attack of the Fanboy
April 5th, 2015 by Damian Seeto 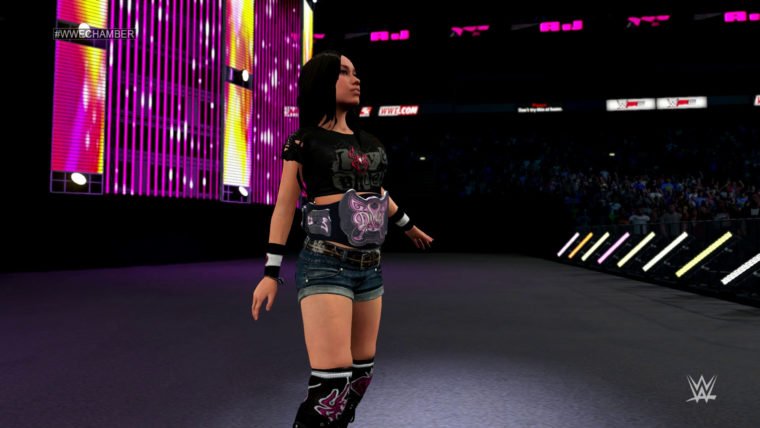 With AJ Lee now retiring from the WWE earlier this week, this has caused some concern with fans whether or not she will be able to be in WWE 2K16.

If you missed the news, WWE announced that AJ Lee has retired from the company effective immediately. They did specify from “in-ring competition” but no other details were given. The announcement came so suddenly and nobody expected her to leave the company so soon.

There have been rumors she retired because she is pregnant, but this has yet to be confirmed. With her retirement happening in April, there’s a chance she might not make it into WWE 2K16. The annual WWE video game is usually out in October or November.

2K Games acknowledged AJ Lee’s retirement on twitter advising her to “#stayweird”. The community manager for WWEGames, Marcus Stephenson, just tweeted out the same hashtag but added that “she will be missed”.

Both WWE and 2K Games finalizes the roster for the games a few days after WrestleMania each year. There is a possibility AJ Lee could still be in the WWE 2K16 roster since she was still in the company at WrestleMania 31 and the day after it.

AJ Lee was one of the most popular female wrestlers in the WWE in recent years. A lot of fans are hoping she still makes it to the WWE 2K16 roster. If you want her to be in the game, you can always bug 2K Games for the next few weeks.

Do you still want AJ Lee in WWE 2K16, or do you think 2K Games should make room for newer wrestlers in the roster this year?