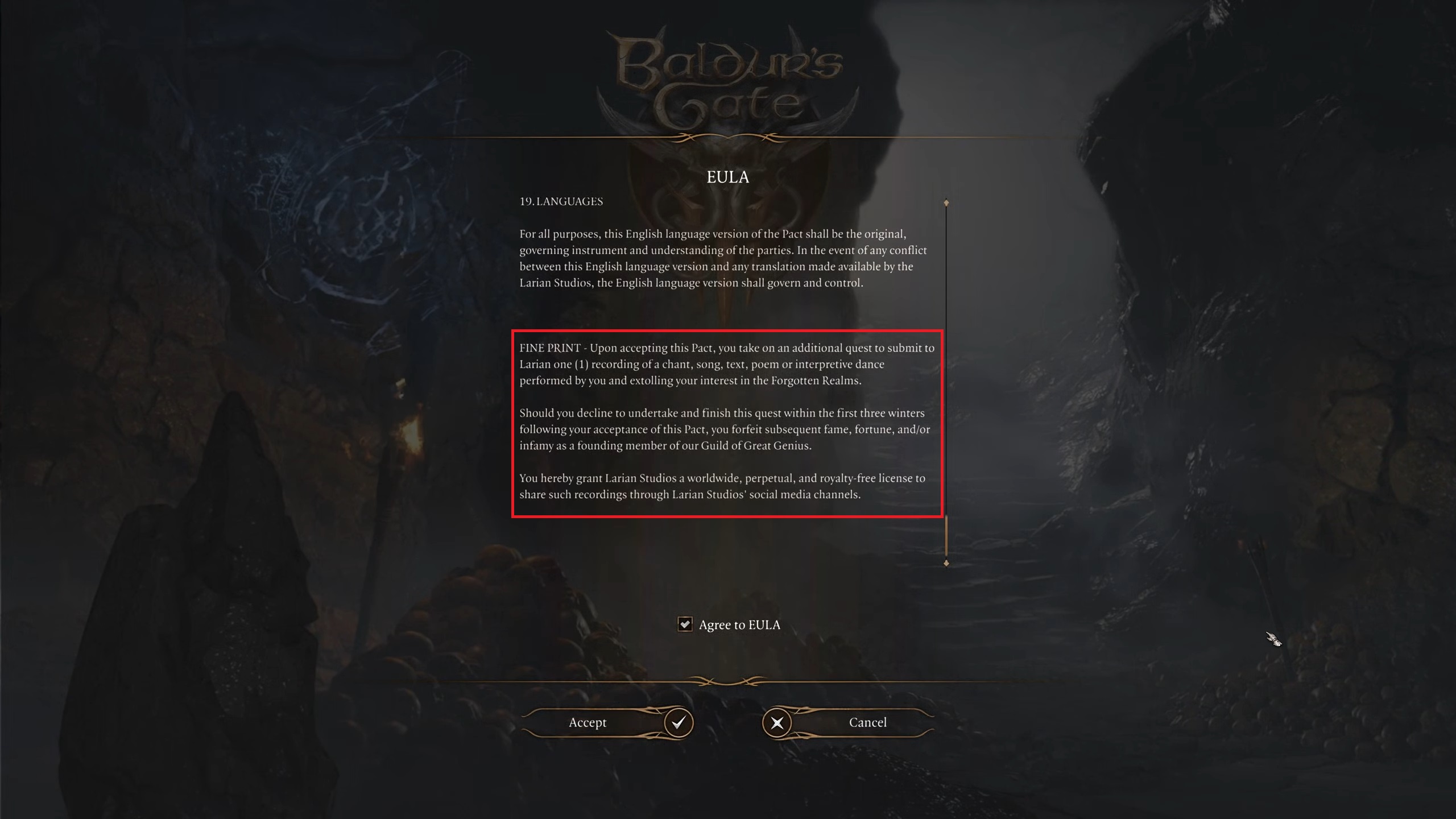 Do you bother reading those pesky end-user license agreements before blindly accepting? Me neither. But maybe you should have taken a closer look at the EULA attached to Baldur’s Gate 3 prior to getting started on the beautiful RPG.

Typically, the fine print preceding gameplay is comprised of walls of boilerplate text. It’s no secret that a majority of people hastily scroll to the bottom of the agreement to slam that “agree” button without a second thought. Larian Studios was crafty enough to include a special segment in Baldur’s Gate 3’s agreement that reminds us why we love this developer.

The section, pictured above, reads as follows:

“FINE PRINT – Upon accepting this Pact, you take on an additional quest to submit to Larian one (1) recording of a chant, song, text, poem or interpretive dance performed by you and extolling your interest in the Forgotten Realms.

Should you decline to undertake and finish this quest within the first three winters following your acceptance of this Pact, you forfeit subsequent fame, fortune, and/or infamy as a founding member of out Guild of Great Genius.

If you are one of the 70,000+ players enjoying Baldur’s Gate 3 at launch, you better start tapping into your artistic side and practicing. In all seriousness, no one needs to figure out a dance routine just because they accepted the EULA.

As pointed out on Reddit, Larian Studios included the text as a nod to other Dungeons and Dragons Fifth Edition books, such as the Player Handbook. A quick view of the aforementioned guide also has a silly bit of text incorporated by the publisher, Wizards of the Coast.

“Disclaimer: Wizards of the Coast is not responsible for the consequences of splitting up the party, sticking appendages in the mouth of a leering green devil face, accepting a dinner invitation from bugbears, storming the feast hall of a hill giant steading, angering a dragon of any variety, or saying yes when the DM asks, ‘Are you really sure?'”

Clearly, Larian Studios did their research when it came to developing Baldur’s Gate 3 given this subtle reference to the source material. Now stop worrying about perfecting your chants and get back to the Forgotten Realms campaign; it’s going to take you quite a while to complete.