The latest news in the world of video games at Attack of the Fanboy
May 6th, 2016 by Kyle Hanson 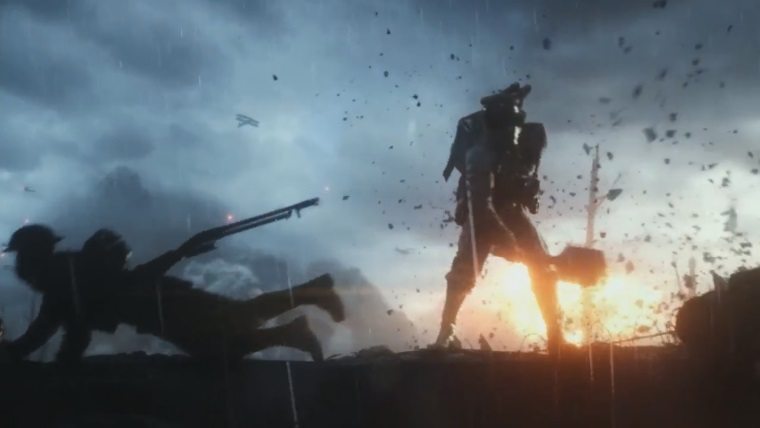 After a whole lot of waiting, including long after the reveal stream began, DICE and EA took the stage today to show off the future of the Battlefield franchise. What most people had been referring to as Battlefield 5, following the naming scheme that resulted in BF 4 coming out in 2013, was shown off for the first time. However, it turns out that the team has went in a totally different direction, and have found a very different name, as hinted at by some last minute leaks.

Battlefield 1 is the next game in the BF series, a prequel of sorts, taking gamers back to World War 1. This conflict has been almost completely ignored by AAA shooter titles, leaving a lot of opportunities for DICE to offer players something new and unique.

The game will take players all around the world, with battles along the Western Front, but also in Africa, and other areas where WW1 broke out. In terms of vehicles, one of the game’s developers said that BF 1 will feature the largest vehicles that they have ever created for the series.

The game will still push players to work as a team. While the game is said to be “fun by yourself” the squad dynamics, and the way teams work, it really becomes better when players work together to fight the enemy. There will also be a wide selection of weapons, including melee weapons such as the shovel found in the trailer below.

The name might seem a bit odd, but when you think about it it makes a lot more sense. The first Battlefield game was actually titled Battlefield 1942. After some spinoffs the series settled on the standard naming scheme that we are used to today, with the third game in the series actually being called BF 2. Looking back there has not been a single game referred to simply as Battlefield or BF 1. With this game going way back into the past, even before the 1942 original, it makes sense to have a name like this.

Battlefield 1 will hit PS4, Xbox One, and PC on October 21st, 2016, though EA Access and Origin Access members on Xbox One and PC will get their usual early access period.