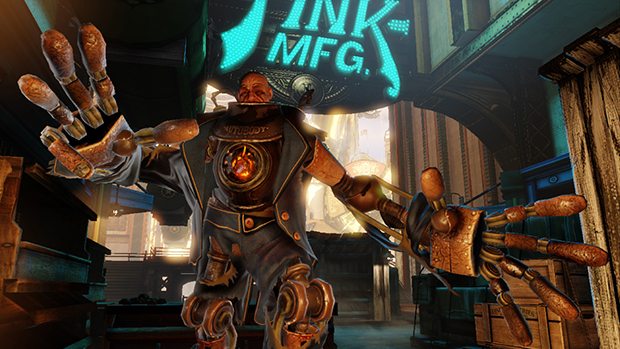 In a recent interview with Wired, Levine tells the magazine that a recent study done by the developer showed that outside of the hardcore fans of the franchise, not many people had heard of the game.

“We went and did a tour… around to a bunch of, like, frathouses and places like that. People who were gamers. Not people who read IGN. And said, ‘So have you guys heard of BioShock?’ Not a single one of them had heard of it.”

Levine explains that to reach this potential buyer of the game, the box art needed to be different than what the hardcore might expect.

“I wanted the uninformed, the person who doesn’t read IGN… to pick up the box and say, okay, this looks kind of cool, let me turn it over,” he said. “Oh, a flying city. Look at this girl, Elizabeth on the back. Look at that creature. And start to read about it, start to think about it… We had to make that tradeoff in terms of where we were spending our marketing dollars. By the time you get to the store, or see an ad, the BioShock fan knows about the game. The money we’re spending on PR, the conversations with games journalists that’s for the fans,” he said. “For the people who aren’t informed, that’s who the box art is for.”