Treyarch recently revealed a small taste of what’s to come in Call of Duty: Black Ops 2 Zombies mode. This time around the mode looks like its going to be bigger and better than ever before, and Treyarch is introducing new characters and new ways to play.

Zombies mode in Black Ops II will feature four new playable characters, which includes the female zombie slayer that was featured in the game’s teaser art when the mode was officially confirmed. You can catch glimpses of the new characters in the short trailer, and these heroes definitely don’t look like the rag tag group of war veterans from the previous games.

The gameplay trailer released by Treyarch did not cover some of the new additions to the game. At a recent Black Ops II preview event, the developers revealed three new game modes within the zombies mode, as well as some of the changes made to the core of the experience to add additional features that haven’t been seen before. 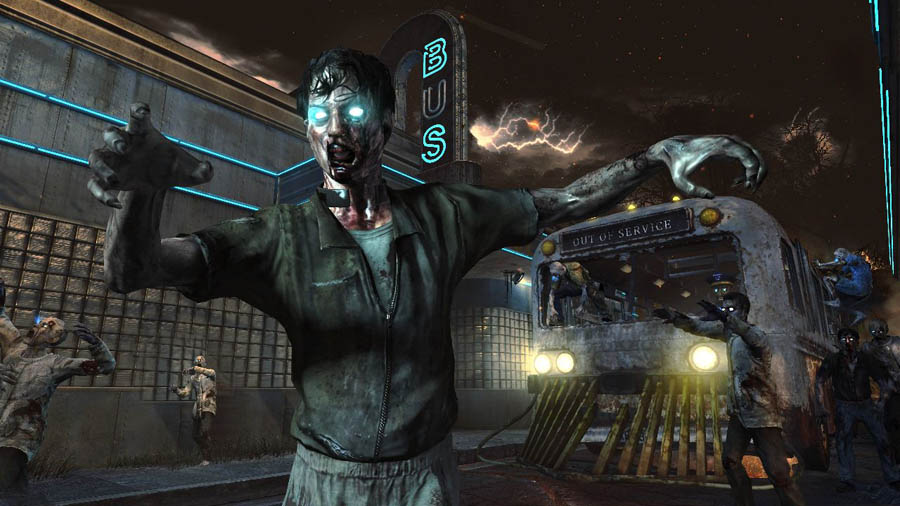 The primary mode for zombies players. Tranzit features a world that is bigger than anything that has ever been in the Zombies mode before. So big, that players can elect to either traverse the massive environment by foot or by bus. Tranzit was shown in the reveal trailer for Black Ops II Zombies which is embedded above. Going to different areas of the world, players can scoop up different rewards that can be compiled to construct bigger bonuses.

A mode that sounds more similar to the classic Zombies game modes, Survival puts four players working together to defend a certain area. The objective? Survive as long as possible in a single area of the Tranzit overworld. These areas have their own set of familiar aid stations like the Pack-a-punch vending machines and mystery munitions boxes.

This is one of the new modes that Treyarch has been boasting, and also features the competitive aspects that were hinted for Black Ops II Zombies. While you won’t be fighting head to head, two teams of four will face-off in a survival style mode. Being called Grief, you’ll be given the tools to directly impede the other team’s progress, likely unlocked by slaying zombies yourself. What kind of shenanigans that teams will be able to pull off to make life miserable for the opposing squad of zombie hunters wasn’t revealed at the event.

Another new element in the Zombies mix this time around will be ability to create custom game modes. In custom games, players are given the freedom to choose variables to tailor the zombies experience. Challenge elements, perks, and starting round were all detailed as customizable elements.

Behind the scenes, Treyarch has built the zombies experience on the multiplayer engine for the first time. It might not look different on the outside, but this gives the team more freedom to do some of the interesting things that they achieve in the multiplayer modes. According to Joystiq, “Extensive Stat Tracking”, More detailed Leaderboards, and improved matchmaking are the primary benefits of this new backbone.

Call of Duty: Black Ops 2 Zombies Mode will arrive when Black Ops II releases for the Xbox 360, PS3, PC, and Wii U on November 13th, 2012. Activision is currently adding an exclusive Zombies NukeTown map for those that purchase the Hardened or Care Package Editions of Black Ops 2.

Black Ops II Call of Duty Nintendo Xbox
You May Like