Borderlands: The Pre-Sequel’s Secret Boss is a Jerk

The latest news in the world of video games at Attack of the Fanboy
October 21st, 2014 by William Schwartz 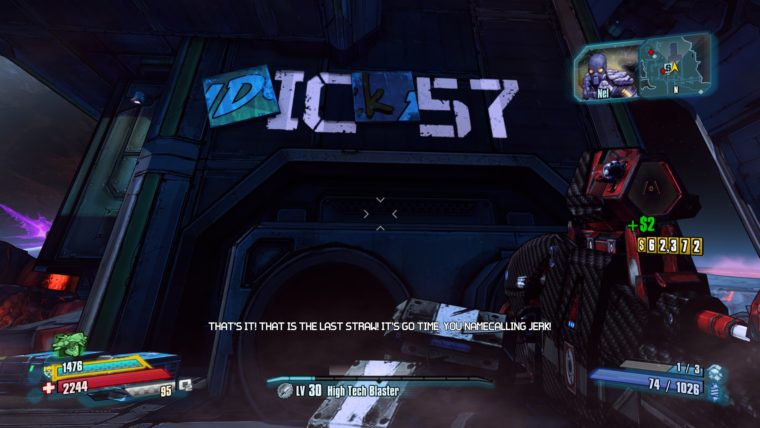 One of Borderlands: The Pre-Sequel’s funniest secrets has just been uncovered and it tosses the Vault Hunters into a hidden boss battle. In case you have yet to play the game, there are minor spoilers ahead. You’ve been warned.

An odd side mission called “Last Requests” sees the Vault Hunters fulfilling recently-deceased Dahl Captain Tom Thorsen’s final wish, namely hunting down two Scavs. The second target is Nel, who Tom does not want killed unlike the first unfortunate Scav. Instead, you simply need to call Nel a dick and watch his dramatic breakdown. The end… or so we all thought. It turns out that Nel is the Pre-Sequel’s super, secret (non-Raid) boss. YouTuber Prestige’r MadLuigi has created a video revealing this gem.

Simply calling Nel a name to his face isn’t enough to drive him mad. As the video shows, a specific set of instructions need to be followed to carefully and creatively spell out the word “DICK” in front of the unstable Scav. Upon viewing the insulting work of art, Nel snaps and a battle royale erupts. Those successful in defeating the enraged opponent will be rewarded with the legendary Skullmasher sniper rifle by Jakobs, a familiar sight for any Borderlands 2 players. Follow the above video and you can enjoy the laughs and epic weaponry, too.

If you’re still on the fence about purchasing Borderlands: The Pre-Sequel, check out our review.