Crypt of the NecroDancer Pre-Orders Live

Like most people you probably wake up sweating in the middle of the night fretting over what to do with that DDR pad you bought back in the early parts of the last decade. Or maybe you just need a fresh rhythm game experience that doesn’t involve an endless line of colored dots streaming towards you. If only there was something exciting that combined rhythm gameplay and roguelike elements, then maybe you could finally get a good night’s sleep. Well worry no more! Crypt of the NecroDancer (dance pad not required) from Brace Yourself Games is coming soon to the PC and Mac and available for pre-order right now.

If you are a fan of rhythm gameplay, thumping soundtracks and quirky game mechanics, this one is probably right up your alley. Having received awards at PAX Prime 2013 and the Tokyo Game Show 2013, Crypt of the NecroDancer is a title to keep your eye on with early access expected to become available in late-2013. 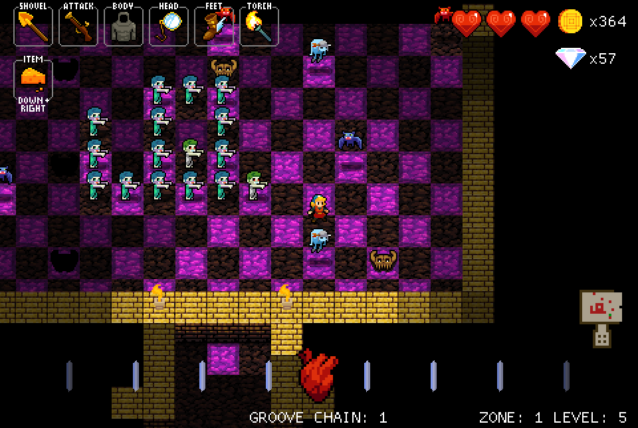 While Crypt of the NecroDancer does not require a DDR pad and can be played with a keyboard or gamepad, dancing like a fool will probably be the most fun and exhausting way to experience it. Gamers will even be able to use their own MP3s to groove along to while tearing through the game’s procedurally generated dungeons.

Do you still have any patience left for rhythm games? Are you looking forward to Crypt of the NecroDancer? Let us know in the comments below.

Crypt of the NecroDancer Indie
We're Looking For Contributors