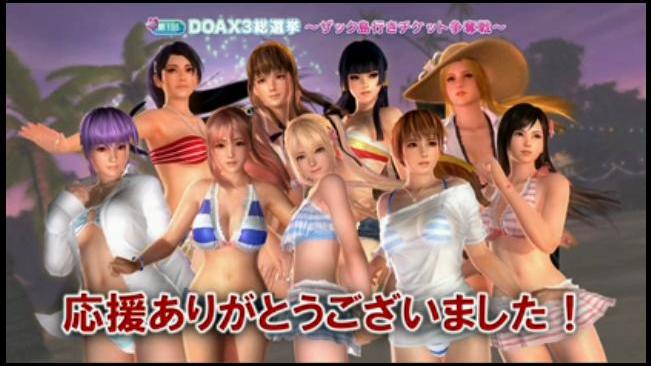 Team Ninja has now revealed the full cast of females that will be playable in Dead or Alive Xtreme 3.

During TGS 2015, Team Ninja revealed the nine playable characters that will be in the game. Sadly, not all of the popular Dead or Alive characters made the cut.

The Dead or Alive Xtreme 3 cast is: Marie Rose, Honoka, Kasumi, Ayane, Kokoro, Nyotengu, Hitomi, Momiji and Helena. The list is from most popular to the least popular. Any character not listed will not be playable sadly.

Helena just beat out Lei Fang to make it in to the game. Earlier the polls had Lei Fang in the ninth position. It sounds like Tina, Lisa, Mila and Christie aren’t making it in to the game either. They could appear as non-playable characters like Zack is.

It was also announced that the game will support the PlayStation VR headset. It’s possible you can play volleyball and such in first-person. This sounds pretty cool and the island setting will make it seem like you are going on a vacation.

Dead or Alive Xtreme 3 will be released for the PS4 and PS Vita platforms in 2016. Team Ninja has yet to officially confirm a Western release for the game.