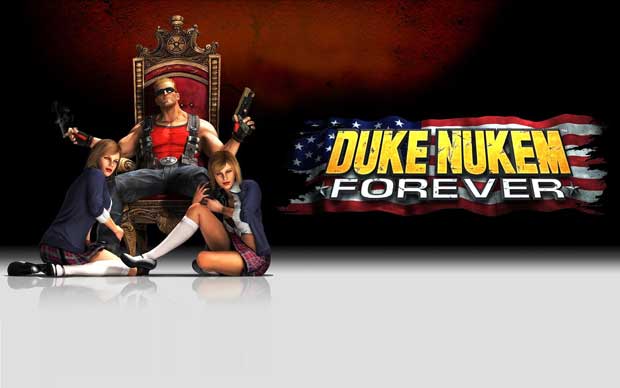 When Duke Nukem returns this Spring in Duke Nukem Forever, the “king” will return with a whole slew of new multiplayer features.  Not much has been talked about on the multiplayer front for the game, but that’s all changed with the release of the latest edition of The Official Xbox Magazine.  New scans have been posted that reveal some interesting facts that fans of the game can get excited over.

Being that the last game in the franchise released over 10 years ago, a lot has changed in the climate of multiplayer gaming.  But it looks like the team at Gearbox has it under control.  Duke Nukem Forever will be launching with 4 multiplayer gamemodes.  Dukematch, Team Dukematch, Capture the Babe, and Hail to the King.  In all modes besides Dukematch, the games will consist of two teams.  The magazine says that 8 players will be able to join the game with four players on the Red or Blue teams.

The names of the modes while slightly different than other shooters are pretty obvious.  Alongside the four gamemodes, there will be 10 maps available at launch. These maps will  all have distinguishing qualities, such as weapons or equipment for a given map.   No word on planned DLC as of yet, but assuming that the game is successful you can bank on it.

Some of the confirmed weapons that were outed in OXM include: The pistol, shotgun, ripper,railgun,freezer,devastator, tripbomb, pipebomb, chaingun, and rpg.  It’s said that Duke will be able to utilize two primary weapons at once, as well as the tripbombs and pipebombs.  Which depending on which bomb you are using can be planted on other players.

The game is also said to have the obligatory level and XP system that are popular in modern online multiplayer FPS games.  Killing other players, winning matches, and other activities will earn you points to use in accessorizing your character.

On May 3rd, 2011 the King of All Shooters returns with over-the-top weapons, massive aliens and unprecedented levels of interactivity.  Shoot hoops, lift weights, read adult magazines, draw crude messages on whiteboards or ogle one of the many beautiful women that populate Duke’s life; that is if you can pull yourself away long enough from kicking ass and taking names.