The latest news in the world of video games at Attack of the Fanboy
December 30th, 2013 by William Schwartz 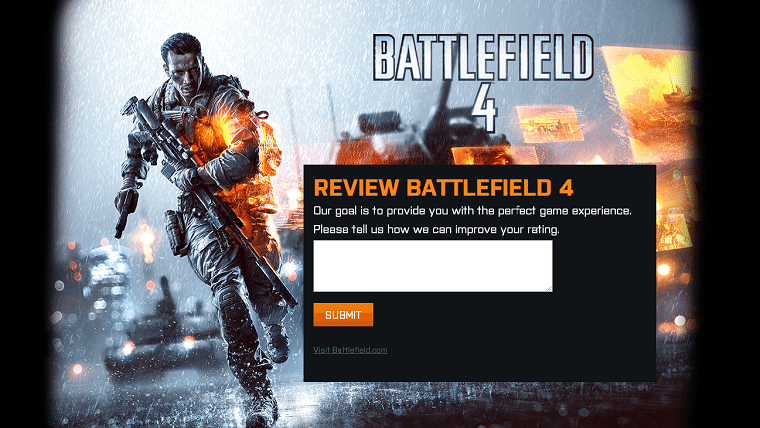 It would appear that EA have called for the community’s feedback on Battlefield 4 on a large scale. According to an article from onpause, the following ‘survey’ has been emailed to anyone with an active EA account that owns or has played the game. Interestingly, the same news has appeared on other websites, and all hyperlinks appear to include ‘PS4-players’ in the text. It’s unclear if only PS4 players have been emailed therefore.

I put survey in inverted commas because it actually only consists of one question; “How likely are you to recommend Battlefield 4?”. There are then 11 buttons, ranging from 0 (not likely) to 10 (extremely likely), that can be pressed. After this page, the picture shown above is found. It asks what they could do to improve your rating of Battlefield 4.

The release of Battlefield 4 has brought EA and DICE under heavy scrutiny, so much so that EA has been hit with a lawsuit for delivering a game that they willing knew was incomplete. So is this simple one question survey too little, too late? Weigh in on the debate in the comments section below.