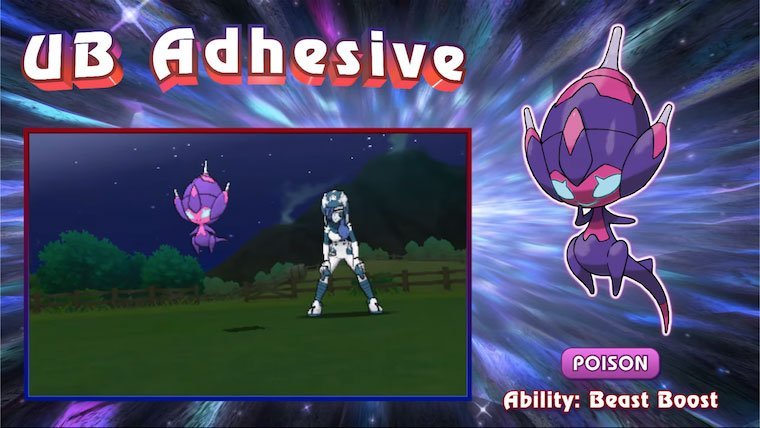 The Ultra Recon Squad brings with it an Ultra Beast never before seen—code-named UB Adhesive! #PokemonUltraSunMoonhttps://t.co/se1lZJQP36pic.twitter.com/EuFbPws8HZ

UB Burst’s head is made up of a collection of sparks, and it has the ability to freely remove it and make it explode! #PokemonUltraSunMoonpic.twitter.com/aa8g4lomHF

While UB Assembly may appear to be made up of stones, each “stone” is in fact a separate life-form! #PokemonUltraSunMoonpic.twitter.com/aBCZDMYz7m

The first of these new Ultra Beasts the Twitter account tweeted on was UB Adhesive, the Ultra Beast revealed today. This Ultra Beast is a Poison-type and is classified as a Poison Pin Pokémon. This Ultra Beast is merely two feet tall and weighs four pounds. UB Burst is a Fire/Ghost-type and is categorized as a Fireworks Pokémon. UB Burst is 5’11” and 28.7 pounds. In the tweet about this Ultra Beast, it is stated that it can remove its head and make it explode. This ability manifests itself in the newly revealed move Mind Blown, which deals massive damage to the opponent, but makes the user suffer largely from recoil damage as well. UB Burst will be exclusive to Pokémon Ultra Sun. UB Assembly is a Rock/Steel-type Rampart Pokémon that stands at 18’01” and weighs 1,807.8 pounds. The Pokémon Twitter explains that “each ‘stone’ is in fact a separate life-form.” UB Assembly will be exclusive to Pokémon Ultra Moon. All of these new Ultra Beasts have the ability Beast Boost, just like every other Ultra Beast, which increases the Pokémon’s highest stat upon knocking out an opponent.

Only time will tell if the new games will include even more new Ultra Beasts. Pokémon Ultra Sun and Ultra Moon come out on November 17 for the 3DS.