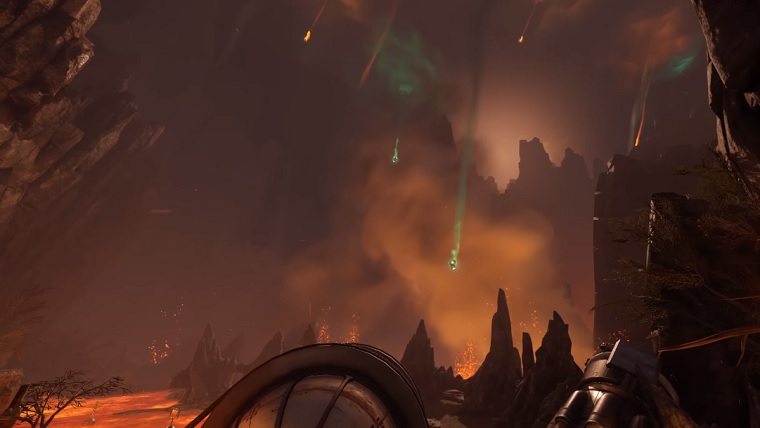 Evolve has enjoyed a rebirth thanks to developer Turtle Rock Studios adopting a new business model for the game, as it turns out that switching the game to the free-to-play model is what they should have done from the beginning. This new version of the game, now called Evolve: Stage 2, has enjoyed a greatly increased player base since launch and shows no signs of letting up.

However, Turtle Rock is making sure that they do everything they can to keep the renewed enthusiasm for the game high, and the Shear Madness event is one way of doing that. The game will be getting an update each week for 5 weeks that will bring new content with each update, and this time the update we’re getting is called Cataclysm.

The first thing of note that the Cataclysm update brings to the table is a new map that is essentially hell. The ground is covered with lava and fire and meteors will regularly fall from the sky, damaging both hunters and the monster. However, some of these meteors will actually heal whatever they come into contact with, so you’ll need to keep an eye out for those ones.

The new update also brings in the co-op mode that people have been waiting for, which lets players battle against a squad of AI bots. 2K games said that this is actually the first of two co-op modes that will be releasing during the Shear Madness event, and that this one actually lays the groundwork for the other co-op mode coming later this month.

Evolve: Stage 2 is currently only available on the PC version of the game, though Turtle Rock has said in the past that if it’s successful on PC then they will also bring it to the console versions. You can check out the Cataclysm map in the video below.