The latest news in the world of video games at Attack of the Fanboy
September 25th, 2013 by Johny Hercock 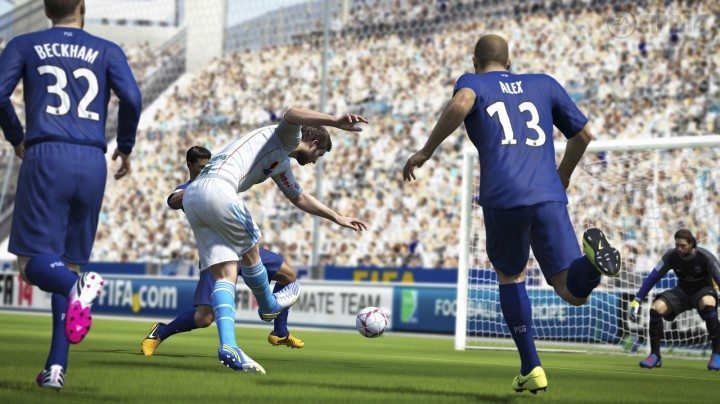 Hello, and welcome to my guide for FIFA 14 Ultimate Team. Whether you’re a seasoned UT pro or a newcomer, this should be of some help to you and your Ultimate Team.

Chemistry is even more important in FIFA 14, as Morale no longer exists. Chemistry, and the new Chemistry Styles now dictate how well your players perform, so you want to get 100 Chemistry in your team.

The easiest way to do this is by buying players that are all in the same league, or that are all of the same nationality. Obviously gold players will be the best bet, but prioritise getting 100 Chemistry before getting a full gold team. Bronzes and silvers that link up with your players are better for you than gold cards that don’t.

Each player can have a maximum of 10 chemistry, and you want each to have the highest number possible. Put them in the right position and buy a manager that’s in the same league or of the same nationality to improve this. Finally, a player gets a Loyalty bonus of +1 Chemistry if you either play 10 games with them, or get them in a pack.

Wingers need good Pace and Dribbling. I’d suggest no less than 80 of either, preferably 85+ in both. You’ll also want to plan how you’re going to play so you can decide which preferred foot you want for your wingers. Get a left-footed player on the right side and vice versa for the other side if you want to cut in and use the Finesse shot. Alternatively, if you plan to cross the ball in for a target man to score headed goals then it’s best to buy wingers with the same preferred foot as their side of the pitch (e.g. left-footed LW.) Even if you build a formation with CMs or CAMs at the sides, then still try to apply the same philosophy.

For both your CBs, and any CDMs that you might have, there are 4 key stats you want. These are, in no particular order; Defending, Heading, Pace and Strength. Other attributes like Short Passing, Jumping and Interceptions are important too. For both positions, try to aim for roughly the following attribute levels:

CAM’s most important stats are Passing (specifically Short Passing), Dribbling and Pace. Look for players that have above 80 in the top three attributes, and use Vision, Weak Foot and Skill Moves as deciders.

Shooting is obviously the stat you want to look for in a striker, while a high Weak Foot ability will also come in handy. Depending on your play style, Heading, Strength, Pace and Dribbling might come in handy as well. If you’re looking for a target man, you can sacrifice Dribbling and Pace for 80+ in Heading, Jumping and Strength. If this isn’t your style of play, then look for strikers with 80+ in Pace, Dribbling and Agility instead.

If your team does have high fitness then they won’t perform as well as they can, so it’s important to keep then high. There are 3 main ways to make sure you always have a for squad; rotate, but fitness cards or build a second team.

If you’re rotating players, then buy players that fit into your team with full chemistry. So if you’re building a BPL team, then buy 3 CBs from the BPL and play them in a rotation. For this method, you’ll want an extra player for every position in your formation, and play them once every two or three games before swapping back to your first XI players.

If you don’t want to buy extra players, then keep your starting 11 playing every game by buying Fitness cards for them on the Transfer Market. Found under consumables, you can either find Bronze individual cards that give +20, or Squad Fitness cards that will increase everyone’s fitness by +10. Try to keep fitness above 90 on most of your players, especially wingers.

Finally, you could buy an entirely different team, and put your starting XI into the Bench and Reserves of your second squad. Using this method, you can play with your first choice team for 2 or 3 games, play 1 with the second team and repeat this process.

Just about everything in FIFA 14 Ultimate Team will require coins, whether it’s players, packs, consumables or anything else. So, you’ll want as many coins as possible. The first thing to try is the EA Sports Catalogue, found on FIFA 14’s home menu. In here, depending on your level, you can buy coin boosts. These will give you between 200 and 1000 coins every game for 5-15 games, all depending on which one you buy.

Aside form this, you’ll want to concentrate on Ultimate Team’s Seasons, both online and offline. Winning a Division in either will bet you a few thousand points, and occasionally a free pack. Even Division 10, offline or online, can give you between 3000 and 4000 coins if you play well enough.

Hopefully this helped, if so then leave a comment below. If you haven’t already, check out Attack of the Fanboy’s FIFA 14 Review and my tips on How to Score in FIFA 14.