Five Nights at Freddy’s 6 Might Be Coming After All

The latest news in the world of video games at Attack of the Fanboy
August 19th, 2017 by Dylan Siegler 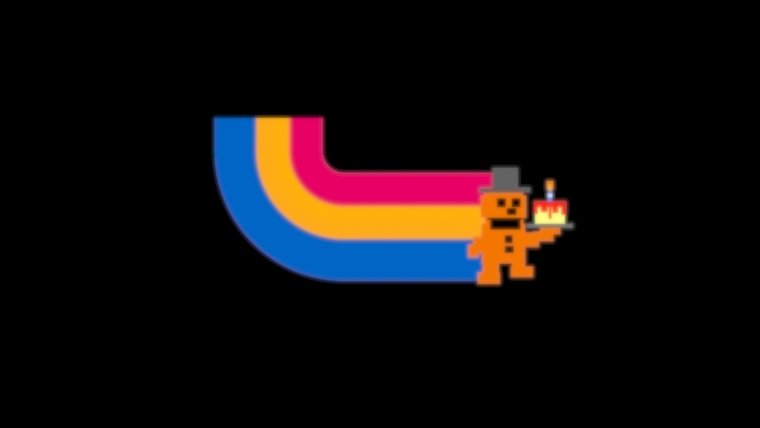 The past couple of days have been eventful for the Five Nights at Freddy’s fanbase. About two months ago, Scott Cawthon, the man behind FNaF, announced that the next installment in the series that he’d been working on, working title Five Nights at Freddy’s 6, was being cancelled. Fans of the series know that Cawthon has pulled jokes like this before, about cancelling or drastically changing games before they’re released, but Cawthon stated that this time he was serious. Fans were still skeptical. And now it looks like they may have been right to be.

The first thing that happened was a couple of days ago, when images from the upcoming book The Freddy Files were apparently leaked. For those who don’t know, The Freddy Files is the upcoming Five Nights at Freddy’s book written by Cawthon himself, but isn’t a novel like Silver Eyes or The Twisted Ones. Instead, The Freddy Files is basically a guidebook for all FNaF games, giving readers all the gameplay advice they could ask for. In addition to being a game guide, however, the book will also apparently reveal all the secrets in the franchise, in both the games and the novels. Part of the book’s description reads, “Special sections throughout [the book] highlight Freddy’s fans’ most talked-about theories, from The Bite of ’87 vs. The Bite of ’83 to the identity of Purple Guy to the recurring hallucinations of ‘it’s me.’ All the evidence, along with every detail of the games and novels, is laid out for fans to explore.”

So some images from the book were leaked. I can’t find the original thread that posted the leaked images (it may have been removed), but the images themselves are still out there. The one people are talking about the most is an image that is supposedly of the last page of the book. 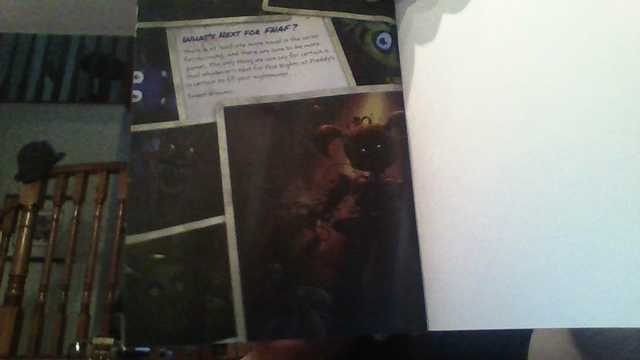 The text on this page reads, “What’s next for FNaF? There is at least one more novel in the series forthcoming, and there are sure to be more games. The only thing we can say for certain is that whatever’s next for Five Nights at Freddy’s is certain to fill your nightmares… Sweet dreams.” 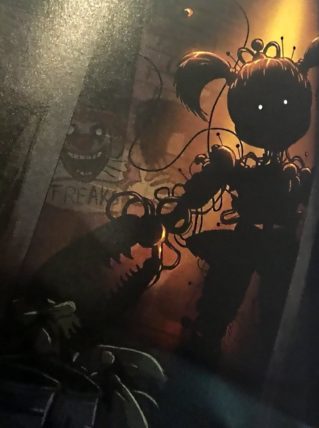 The image underneath the text is a new one that hadn’t been released before. It appears to be an image of a modified version of Baby from Sister Location. This image along with the text’s message of more games has lead fans to believe that the cancelled Five Nights at Freddy’s 6 (possibly a direct sequel to Sister Location) is on its way after all. Due to the “FREAKS” poster next to Baby in the image, fans have taken to calling this version Freak Baby or Freakshow Baby and have been theorizing that the next FNaF game could take place in a circus freakshow. We’ve already gotten games that take place in pizzerias, a horror attraction and a secret, underground lair, so why not a circus?

In addition to the leaked image, Scott Cawthon himself has finally broken his two-month silence. For the first time since the cancellation announcement, Cawthon’s official website has been updated. Instead of the static that had been on the website for months, we now have a new image (which you can see at the top of the article).

This new image shows an 8-bit Freddy carrying a cake with a rainbow following him. Fans are unsure what exactly this image is teasing. Is it teasing The Freddy Files? Is it teasing a new game? Something else entirely? One fan, however, put together that the rainbow following the 8-bit Freddy is reminiscent of the covers of Activision’s Atari games, which featured the playable character being followed by a rainbow. This would clearly seem to indicate another game in the series. 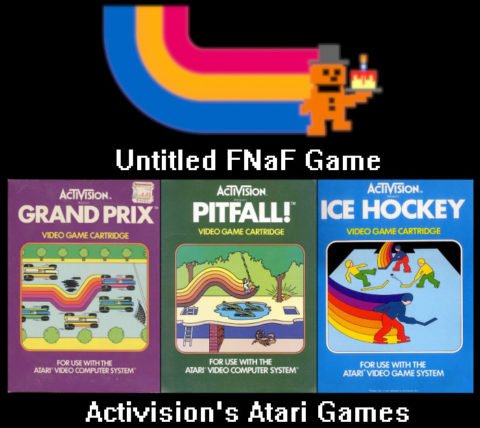 In Cawthon’s Five Nights at Freddy’s 6 cancellation announcement, he stated that there will be more FNaF games, but that they will likely be spin-offs, like FNaF World and its subsequent mini-games were. FNaF World was originally in 8-bit, at least in the overworld, before an update, so the new image could be a sign of a new FNaF spin-off game. The “more games” that Cawthon seems to promise on the last page of The Freddy Files could also be referring upcoming spin-offs.

However, the main series of Five Nights at Freddy’s games, starting with FNaF 2, have included several 8-bit mini-games between main levels, which the fanbase have come to call the “Atari mini-games.” Cawthon has always been well aware of what’s happening in his fanbase, so it seems like more than just a coincidence that he released an image that emulates old Atari games’ covers, which would seem to coincide with the fan-given name for the main series’ mini-games. It also would seem odd of Cawthon to tease more FNaF games in The Freddy Files if really all he means is more spin-offs. That being said, it would also seem strange for Cawthon to release a book like The Freddy Files, which apparently contains all the franchise’s secrets and lore, if there are still more main series games on the way. But it is confirmed that there will be a new novel after The Freddy Files, so why not a new main series game? Like usual with this franchise, I guess we’ll just have to wait and see. The Freddy Files comes out on August 29 and we’re likely to get more information in the days leading up to and following its release.