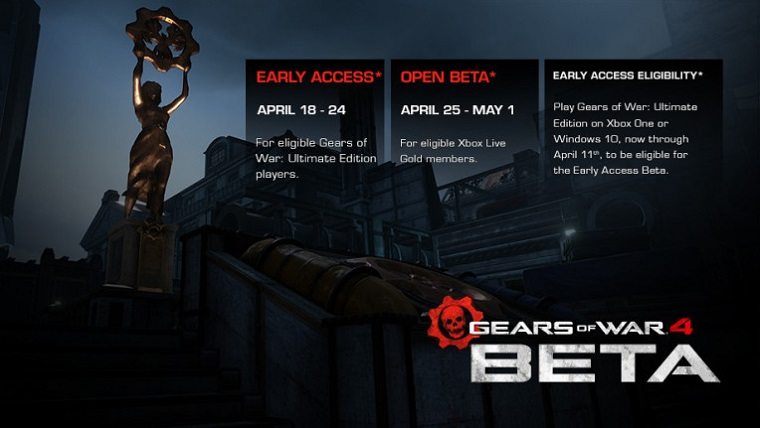 More and more news regarding Gears of War 4 has been coming to light lately, and now we have the official details regarding the beta start dates for the game. The beta phase will begin on April 18th, and if you’re not in yet there is still time to guarantee a spot.

Players of Gears of War: Ultimate Edition will receive tokens to begin playing the Gears of War 4 beta on April 18th, which goes for both the Xbox One and Windows 10 versions of the game. After that, the open beta portion opens up for all Xbox Live members. The open beta will run from April 25th and ends on May 1st.

To make matters even better, Major Nelson has revealed that they are extending the timeframe for people to gain access to the closed beta of the game. He revealed on his blog that, “we’re extending the timeframe for Gears of War: Ultimate Edition players to qualify for early access to the Gears of War 4 beta from March 1 to April 11. To qualify, just log on to Xbox Live and play Gears of War: Ultimate Edition on Xbox One or Windows 10 by 11 p.m. PDT, April 11.”

Gears of War 4 is set to launch for the Xbox One in the second half of 2016. It was recently revealed that the game will take place 25 years after the events of Gears of War 3 and star series protagonist Martin Fenix’s son.