Leaks regarding the mechanical entity that dwells within the Chasm. 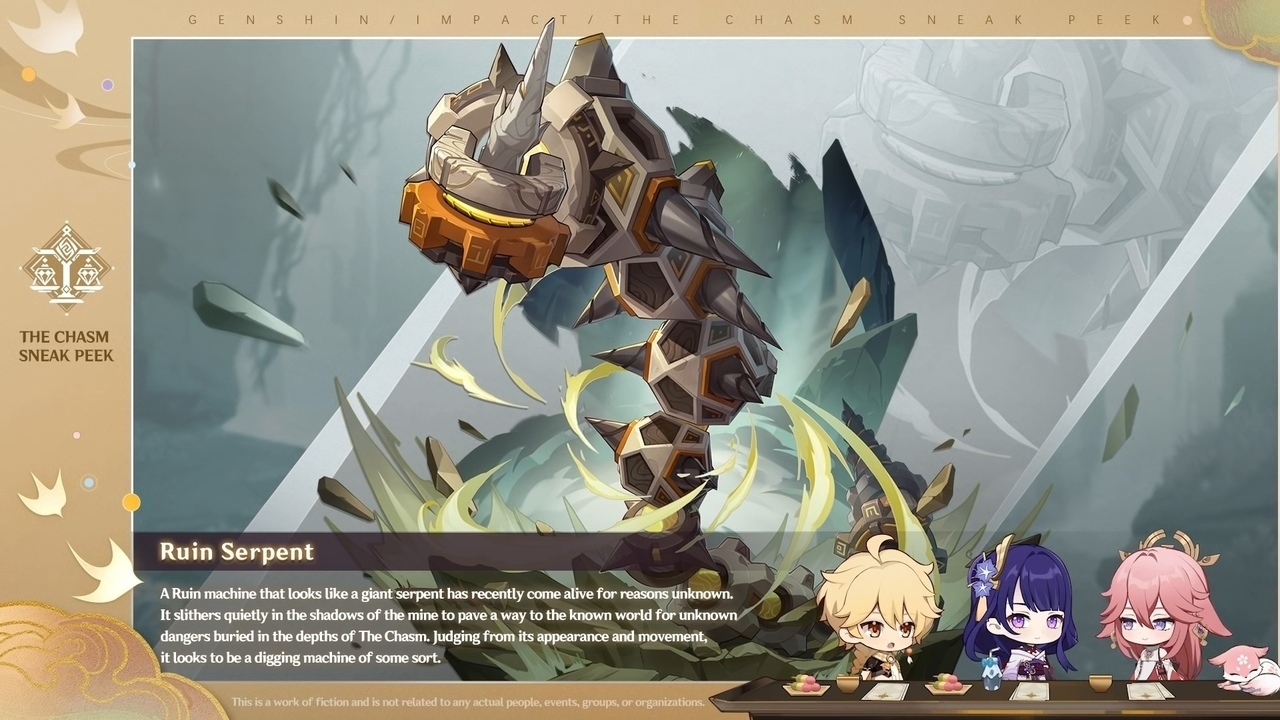 Looking upon existing leaks, in-game screenshots of the Ruin Serpent have already propagated the online communities of Genshin Impact. When the monster was first announced back during the patch 2.5 Livestream, it was unclear as to whether or not it’s going to play a huge part in the upcoming patch that will feature the debut of a region affiliated to the nation of Liyue, The Chasm. Concept arts regarding the area depicted a zone that was associated with mining activities, consisting of facilities above ground with underground caverns that stretches to seemingly large expanses.

This slight ambiguity has come about as a result of the Ruin Serpent being shown much earlier before its formal release in Genshin Impact. Generally, whenever new bosses or enemies are introduced in the following come, the Livestream just before nearing the end of the current cycle will summarise and discuss the mechanics of the obstacles to come that would face the players in their future adventures. This was the case with Enkanomiya, where the Vishap bosses and their energy-hitting mechanic were divulged during the broadcast.

As to the Ruin Serpent, it was a sneak peek that occurred at the end of Patch 2.4 that described it as a giant serpent that would be encountered by the player whilst exploring the region, the reveal at the time had no accompanying footage, aside from concept art of the creature’s design from a 3D modeling and or rendering standpoint.

Over on Reddit, screenshots and other in-game assets have confirmed the Ruin Serpent to be a world boss for The Chasm. This coincides with the recent Beta Test for patch 2.6, which upon commencing led to numerous details and or information being released to the general public via the hands of leakers and or data miners.

The Ruin Serpent in the screenshot above is shown to be a towering presence with its dedicated health bar. The name above the health bar is presumably a placeholder, as the general convention for Boss names in Genshin is the name of the said boss, followed by their corresponding title in smaller fonts directly underneath. Other leaks posted in the subreddit would suggest that the Ruin Serpent has its own dedicated boss mechanics and materials, with images depicting the machine going underground and being toppled over by the player at certain points during combat.

Generally, whenever a new boss is released in Genshin, it would indicate the arrival of a character that requires said specific boss mats. And in this instance, it is difficult not to speculate whether or not that’s going to end up being Yelan, or another character even further down the line.