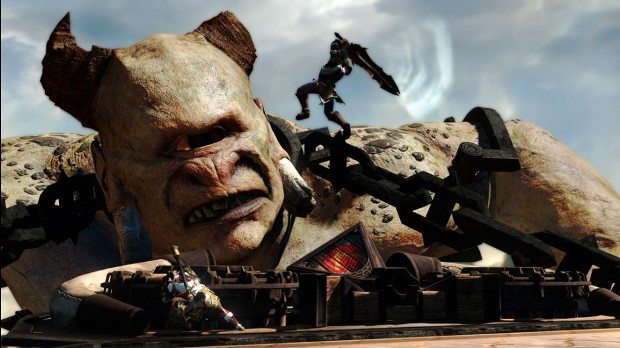 God of War: Ascension details are dropping left and right today and the big one is “epic multiplayer.” The Santa Monica developer has confirmed that up to eight players will be competing against each other to take down truly massive bosses for glory and gore, online. The game will come with the ability to create your own character and select a god to worship: Zeus, Hades, Poseidon or Aries. Each god offers their own set of special abilities that will be passed on to the player as well as armor and weaponry. As the player levels up, they will be able to unlock new weapons and abilities. It’s your typical multiplayer setup, but the gameplay is inherently God of War.

The ‘Domination’ game mode shown off to press earlier today displayed “two teams of four battling a large cyclops to gain access to the Spear of Olympus, with the camera zooming to individual ‘visceral battles.'” In the game, players battle each other in grizzly, intestine spilling, body slicing action until one team ‘dominates’ the other and then turns their attention to bringing down a colossal Cyclops via chain restraints and eye gouging. “The whole idea behind it is that we want to bring the big moments to multiplayer,” said game director Todd Papy to USA Today.

Kratos will not be playable in multiplayer, but players will be able to use many weapons similar to his signature arsenal. Five to seven maps will be available at launch with several different game modes to play from. Not many single player details have been released to date, other than that the game will feature a “revamped combat system” and will most likely be a prequel to the series. God of War: Ascension is expected to be released Spring 2013 exclusively for Playstation 3.