The latest news in the world of video games at Attack of the Fanboy
November 19th, 2010 by William Schwartz 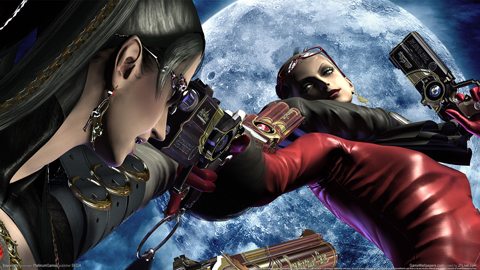 Not one?  Not in any category?  I think a collective sigh for gamers that played the brilliant third person beat em up shoot em up went out when they read the nominees for Spike’s VGA’s and Platinum Game’s Bayonetta was nowhere to be seen.  Not one nomination for what was easily one of the best games of the year.  Are boobs not suitable for thee respectable Spike TV?

Sure it didn’t have the graphics of God of War or depth of Mass Effect but it was one hell of a fun game to play.  It’s rare that a game can capture everything that is good about the genre and roll it up into a  ball of perfection, and Bayonetta  did this.  Yes, on the surface, Bayonetta is nothing but an adolescents wet dream but digging deeper Bayonetta was surely one of my favorite games of all time.  It’s pretty rare when the controls of a game are so good that they make you want to come back for more.   Beyond the superficial aspects of the game it told an ok story, but it’s beauty was in the way the developers wildest imaginations came to life on the screen.  For a genre as old as this it’s hard to not make a stale imitation devoid of any and all substance.  Bayonetta could have been this and it wasn’t.  Bayonetta could have been Dantes Inferno but it wasn’t because the developers took a chance at making a great game.  And they did.  Bayonetta was critically well received  and has a 90 rating on metacritic.  This is within a 1-3 point range of the highest scored games of the year.

See whats going on here is just reinforcing the fact that developers shouldn’t be creative.  They should try to make clone games that one up their competition, and give it time because we’re awfully close to that.  Enough with the shenanigans.  Just call it BSGY (best selling game of the year) and be fucking done with it already because you’re not fooling anybody.. well not any real gamers. I mean Call of Duty Black Ops doesn’t even work for Christ’s Sake. Sure it’s a good game but it’s broken on the majority of the platforms it was developed for. Red Dead Redemption?  Seriously, great game.. been there done that in cars two years ago. Rant Done.