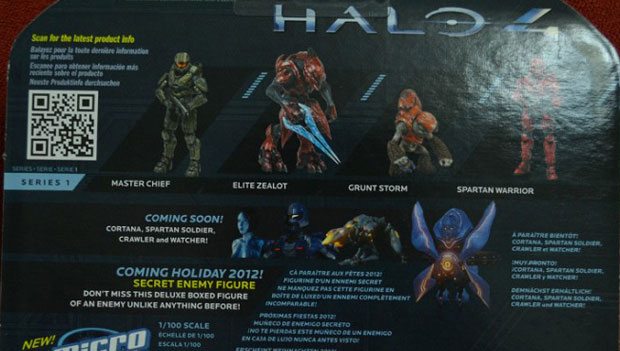 It’s no secret that the Master Chief will be up against brand new enemies in Halo 4. When you drift aimlessly toward a mysterious planet possibly inhabited by an ancient race of ultra-intelligent beings, you have to expect a few surprises. Thanks to Xbox Skyer, you now have two less surprises to worry about.

The above image, courtesy of a Halo-series McFarlane toy package, shows two new enemies that will appear in Halo 4 – the “Crawler” and “Watcher.” Though we really cannot make a ton of inferences based on the image alone, it does give us a good idea of what each enemy brings to the table. The Crawler looks like some sort of demonic dog with a crystallized head and almost looks as if it is covered in white-hot, molting metal. The Watcher on the other hand, looks to be an all-seeing beetle of some kind, though it’s tough to presume what its primary attack will be.

Are both of these creatures a part of the Forerunner race? 343 Studios did mention that the new breed of enemies will work together to attack you, so a fleet of Watchers giving away your position and a pack of Crawlers ready to maul you may in fact present a formidable challenge. Hopefully, all of the game’s new enemies will be detailed in full come E3 time in just a few weeks.