Earn rewards this year, enjoy them next year Halo Infinite was hit with a devastating delay, pushing the major release out of the Xbox Series X launch window, but that hasn’t stopped a Monster Energy promotion from kicking off. The green trio that is Microsoft, Master Chief, and Monster Energy have come together in a new promo that awards double XP, weapon skins, and other goodies ahead of the game’s new 2021 debut.

Gone are the days when the Xbox mascot was slapped on the sides of Mountain Dew Game Fuel. Now, the Demon will appear on specially branded Monster Energy cans throughout the US wherever the drinks are typically sold. The UK will receive the same promotion starting next month. Banking codes now will secure in-game content well ahead of time.

Double XP comes in 30 minute increments and has a hard cap at 60 hours. So for those planning on punishing their system with 120 cans of liquid heart palpitation, enjoy the increased progression rate for the maximum time allowed. That is assuming any human being challenging themselves in this way would live to see 2021.

Player emblems and weapon skins are also attainable through the promotion. While product-inspired content doesn’t typically evoke positive feelings, we can at least find comfort in the fact that Monster Energy didn’t plaster their signature “M” on the side of the Spartans’ arsenal.

The weapon skins don’t immediately appear awful, as they simply consist of green chrome highlights, but the “adrenal weapon coating” naming borders the usual cringe associated with in-game product placement. For what it’s worth, prospective buyers only need to secure eight cans of the chemically-enhanced concoction to attain all unique rewards. That is a more realistic number than 120. 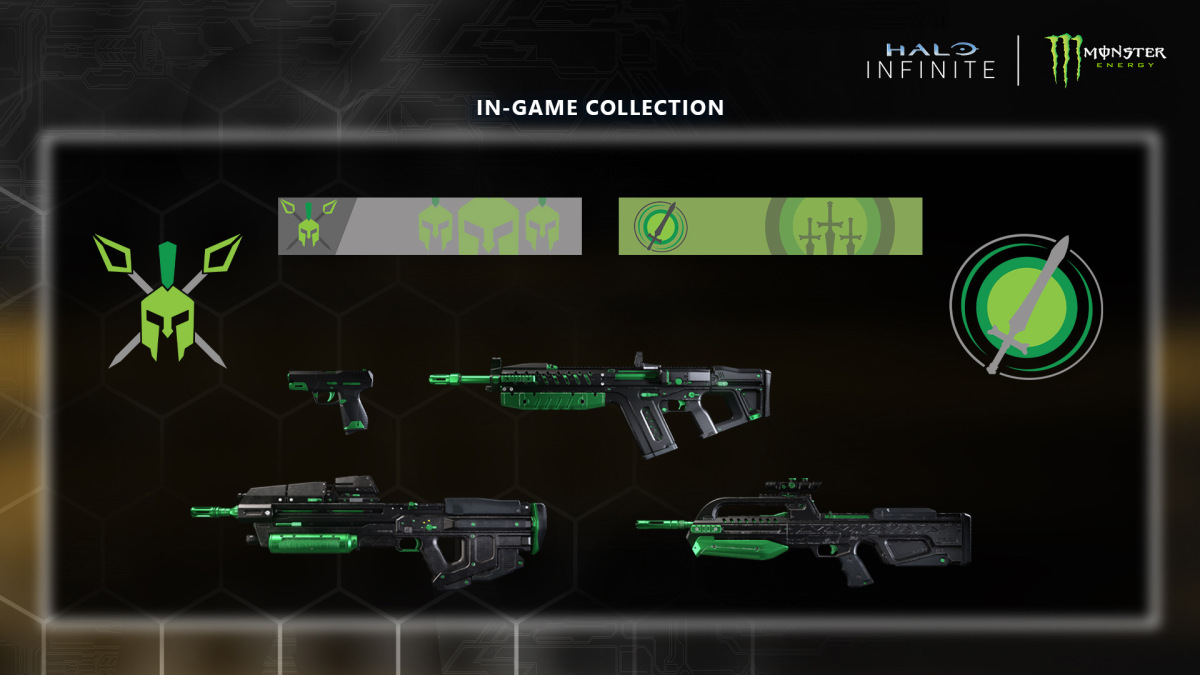 In order to take advantage of the aforementioned content, receipts containing qualifying purchases must be uploaded on Monster-Halo.com. A code will then be provided, which is entered on the Halo Waypoint website to secure the rewards. Every uploaded receipt also acts as an entry into a giveaway for a Paris trip and Xbox Series X consoles. Honestly, both of those prizes sound a lot more enticing than forgettable weapon skins.

But, hey, it could be worse. We could have been forced to watch Master Chief throw back Monster as Sam Bridges did to restore stamina in Death Stranding. In the unlikely event that an associated marketing manager is reading this article, please don’t get any ideas.