If You Want the Max Payne 3 Collector’s Edition, Act Fast 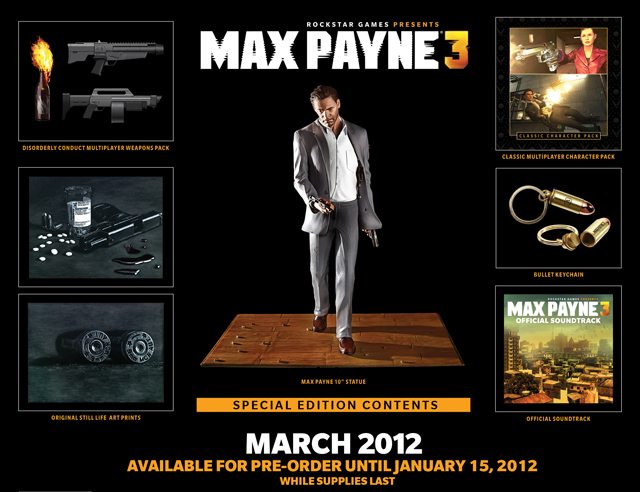 If you’re not yet excited about the announcement and reveal of Max Payne 3, you probably should be. First of all, Rockstar’s new project will be headed by Dan and Sam Houser, the primary guys responsible for writing and bringing to life the captivating environments that you have enjoyed throughout the GTA franchise as well as Red Dead Redemption. Secondly, the game looks like it will be getting back to its dark and somber roots that made the original a surprising hit back in the day.

According to Sam Houser, “This is Max as we’ve never seen him before, a few years older, more world-weary and cynical than ever.”

The press release detailing Max Payne 3 stated that Max has left New York City behind and has “drifted from bad to worse.” Max has apparently been double-crossed in the new city he finds himself in, and as per usual, he is searching for the truth and a way out of the mess. The game will reportedly be set 8 to 12 years after the events of the second game in São Paulo, Brazil, where Max is working in the private security sector for a wealthy local family.

Today, Rockstar announced the details of a $99.99 collector’s edition of Max Payne 3 which will in fact be limited, unlike many of the “limited editions” coming out these days, as you only have until January 15 to pre-order. Here’s what you’ll be getting when you throw that $100 down:

It seems like just yesterday that I was dodging bullets with Max Payne for the first time using the Xbox’s mammoth launch controller. The original Max Payne‘s neo-noir elements and graphic novel-style narration was truly avant-garde for its time, and we’re still seeing some of those components being reiterated throughout the industry today. Though I felt Max Payne 2 failed to capture the essence of what made the original so enchanting – the edginess and polished action sequences, it was all in all a solid sequel with a substantial story.

Yet what remains the number one, undisputed reason to look forward to Max Payne 3? Forgetting altogether that the last form of entertainment from the Max Payne franchise was an absolutely horrid film adaptation of the original game that made few attempts to take the plot from the actual game into consideration. Instead, we had to watch the game’s opening flashback sequences appear halfway through the film and the hallucinations of some uninspired demonic creatures that were vaguely explained. You got snubbed for your performance, Mark Wahlberg; you had that Razzie for Worst Actor in the bag.