The latest news in the world of video games at Attack of the Fanboy
February 14th, 2017 by Dean James 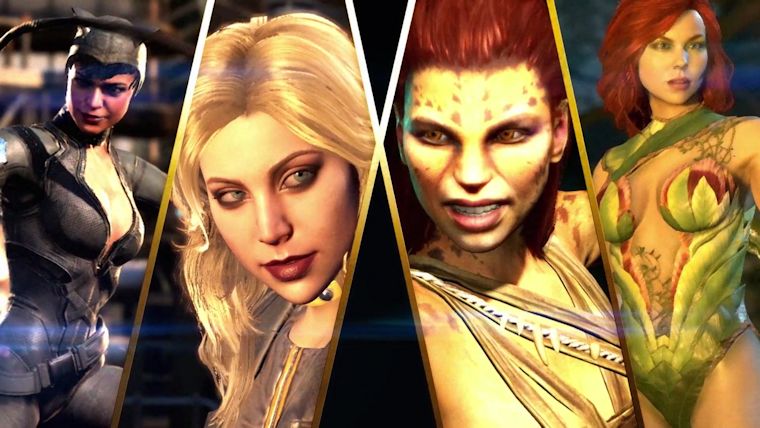 The roster for Injustice 2 has been really shaping up lately with announcements like Black Canary and Swamp Thing, but they weren’t done with the reveals this week quite yet. Coming only a day after Swamp Thing’s reveal, NetherRealm Studios had a Valentine’s Day gift in the form of three new character announcements via a brand new trailer.

There was much speculation about the next announcement, with Ed Boon seemingly teasing Firestorm last week and others thinking maybe Green Arrow would be announced due to Valentine’s Day. However, NetherRealm had different Valentine’s Day plans as they revealed two new female fighters and the first gameplay of another that was announced before.

Even though Black Canary was revealed a couple weeks ago, they chose to make a trailer focused on four female fighters titled “Here Comes The Girls,” with Black Canary being one of the foursome. The two new character announcements for Injustice 2 in the trailer consist of a returning character from the first game and an all new fighter. The returning character is that of Catwoman, who this time comes without her patented goggles from the first, though that is likely going to be a gear item.

She is joined by Cheetah, who looks to take the place of Ares as the Wonder Woman villain in the game. It was believed previously that Cheetah might just be a premium skin for Catwoman, after showing up on the leaked list that is looking more legitimate with every reveal, but it looks like she is a her own full fledged character here.

The final character focused on in this trailer is the previously announced Poison Ivy, who we previously had zero gameplay of before today. She definitely looks to have a unique moveset that should work out very well in Injustice 2.

Make sure to check out the trailer for yourself to see all the fighters in action and look for Injustice 2 to release for Xbox One and PlayStation 4 on May 16.