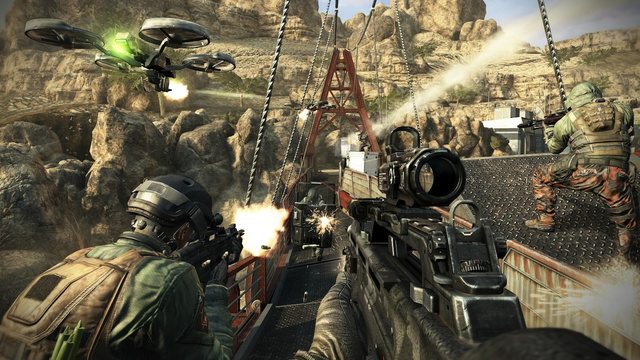 Numerous reports out of Cologne are saying that Treyarch has revealed that there will not be killstreaks in Call of Duty: Black Ops II. The gameplay staple that thrust this franchise into the spotlight has been modified significantly to focus on “Score Streaks” instead. Likely looking to address franchise fan requests, this new way of rewarding players sounds like it gives players points for other actions outside of just killing an enemy.

The introduction of score streaks means completing onjectives like capturing flags, domination points, defending teammates and other actions will add to your score streak total. These Score Streak rewards range from a number of items, many which were shown in the Black Ops 2 Multiplayer reveal trailer that was recently released. They range from a hulking mech known as the AGR to a Guardian turret that emits microwaves to hinder the enemy.

Modern Warfare 3 made the first move with the addition of Support Packages that called in a variety of helpful tools for the less selfish variety of player. With Score Streaks, it looks like Treyarch is taking this to the next level and getting players playing a more team oriented flavor of game.

It sounds like this could be just the remedy that COD campers need to come out of the corners they’ve been hiding in for all these years, but we’ll have to wait and see if these new rules work when the game arrives on the Xbox 360, PS3, and PC this November.