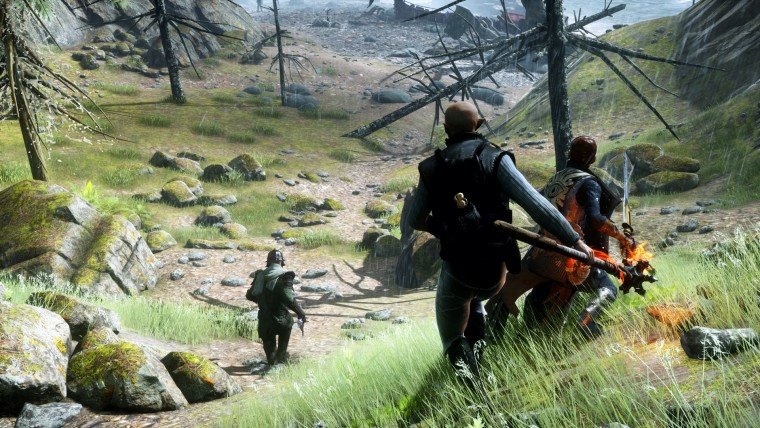 As we recently addressed, the upcoming and highly anticipated outing from Bioware, Dragon Age : Inquisition, is going to be a very long game. That’s just with a straight play through and just talking about the single player aspect. It will certainly be well received as we have been starved of a proper RPG for quite some time now. The multi-player contingent of Dragon Age : Inquisition  that was announced has been showcased at PAX, with some lucky people getting a hands on experience with it.

Much like we saw in Mass Effect 3, the multi-player game mode in Dragon Age : Inquisition  is separate to your single player campaign. In the co-operative multi-player mode, you can select from 12 different builds for your character to play as, earning levels and cool new moves as you go. In the typical fashion of co-operative efforts in a medieval-esque setting, it is important for a party to have a diversity of characters, including dedicated tanks, damage and support classes.

Making use of your class skills and playing in character is also important. If you are a squishy DPS mage you should stand back and blast away, avoiding damage whilst dishing it out, or you will soon find yourself on the wrong end of a sword or arrow. The same goes for every class. You must fight to your strengths and trust in your team mates.

As your team explores a dungeon and battles enemies, random events will play out. Completing them will net extra gold for the team. Similar to the way it worked in Mass Effect 3  with the objective focused waves, except at random in this case. You will find scattered throughout the map rooms only certain classes can open, which offer a higher level of risk vs reward; for example a dangerous boss fight for greater loot. Gold and health pick ups are shared, with experience distributed in class appropriate ways, so it isn’t a rush to land that killing blow or run around trying to loot everything possible. It’s always nice when developers highlight co-operative spirit in a co-operative mode and discourage or eliminate the possibility of loot ninjas.

Whilst having a great multi-player option is awesome in itself, it has also resulted in combat being super refined for the single player experience, which can only spell good things for the game.