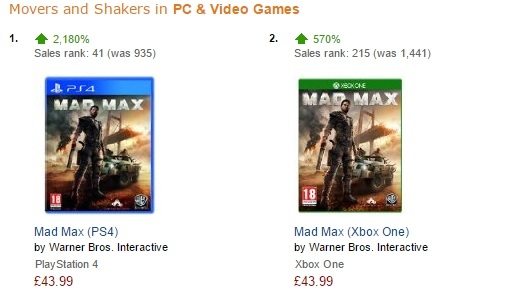 Earlier today we posted up the new gameplay trailer for Mad Max from Warner Brothers Interactive and Avalanche Studios. Now less than 24 hours after the release of said trailer to the internet, Amazon is having a huge rise in sales.

It looks like Mad Max is selling rather well thanks to the gameplay released earlier today that showcased customization, some story elements and even combat. It seems that fans are excited especially with the new Tom Hardy, Mad Max: Fury Road movie right around the corner. Sales have risen on Amazon.co.uk for Mad Max by 2,180% for PlayStation 4 and 570% for Xbox One. Which also says a lot about the platform favoritism in the UK. As far as the US goes Amazon has Mad Max for PlayStation 4 in 3rd place with a rise of 1,901% behind Guild Wars 2 and BandFuse with the Xbox One version nowhere in sight.

It’s interesting that the PlayStation 4 version of Mad Max is selling alot better than the Xbox One version, either way it’s great to see a game that finally got some gameplay after a long wait is already selling pretty well, less than 24 hours after release of said gameplay.

Mad Max is set to release for Xbox One, PlayStation 4 and PC on September 1st, 2015.