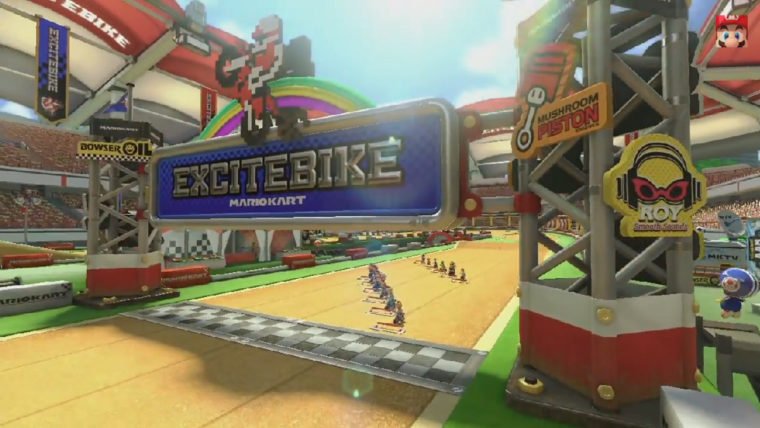 In a new video released today Nintendo has revealed another new track that is being added to Mario Kart 8 as part of the upcoming DLC pack. As we already know, there are two DLC expansions planned for Mario Kart 8. Each will feature new racers, tracks, and karts. We previously saw the reveal of Link and his Zelda themed motorcycle, as well as the returning Yoshi’s Circuit track. Today we get a look at Excitebike Arena, which is based on the NES classic.

Excitebike Arena is part of the 1st DLC pack coming to Mario Kart 8
next month!

Featuring remixed music from the original game and the series’ trademark aesthetics and racing track design, Excitebike Arena looks to shake up the Mario Kart formula by diving into other Nintendo properties. This seems to be a big part of the DLC, as it includes characters from The Legend of Zelda and Animal Crossing, along with an unknown amount of tracks from other games. More info should be coming soon though, since the first DLC pack is scheduled to hit next month. Also worth pointing out, the video above gives a good look at some of the other elements being added in DLC Pack 1. Tanooki Mario and Cat Peach, two of the new racers, are shown off quite a bit.