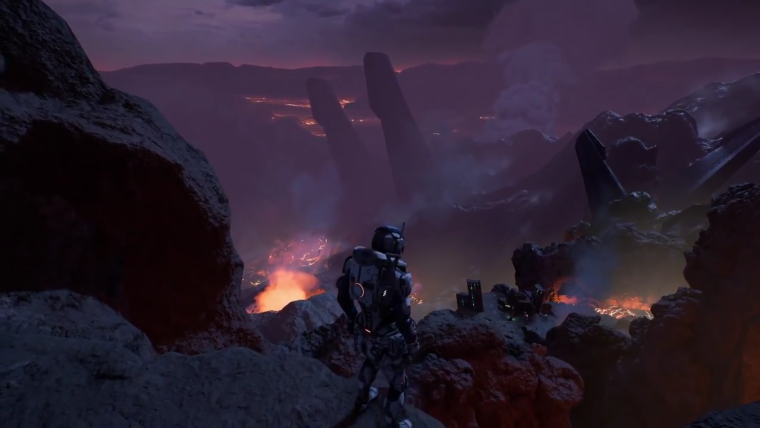 BioWare unveiled a new trailer showing off some Mass Effect: Andromeda gameplay at the Nvidia CES keynote. In the short two minute clip we’re given a brief look into the game’s menus, interface, skills and profile systems, as well as how actual combat will work.

The first thing that most people will notice is that the game is still Mass Effect. Other than the upgraded graphical fidelity, the game will look very familiar to any fan of the franchise. Those that were worried that the game would stray too far off from the franchise’s roots have nothing to fear.

Up next is the Profile system. A new feature in Mass Effect: Andromeda is the ability to swap classes (or “Profiles” as they’re now called) on the fly. This is demonstrated in the trailer with Pathfinder having the option to choose from 7 different profiles: Soldier, Engineer, Adept, Sentinel, Vanguard, Infiltrator, and Explorer.

Based on the footage, it looks like each profile gives passive buffs to Ryder. For example, the Soldier profile increases weapon damage, accuracy, and clip size while the Engineer profile improves the survivability and damage of tech constructs. Each profile also appears to have 6 ranks.

The next bit focused on Ryder’s skills. Just like in previous Mass Effect games, skills are broken down into categories. In this iteration, those categories are Combat, Biotics, and Tech. From there we see that the Pathfinder has access to every skill under each category and can freely choose between what to level and use. It also revealed that branching upgrade paths are making a return as the Flamethrower skill has separate upgrade options starting at Rank 4.

The video ends with a brief battle between Ryder what we assume are Remnant foes. The HUD is very similar to what we’ve seen in the past with your standard health and shields bars. We also see that Ryder can equip up to three active skills at a time. There are also icons that represent your two squad mates, again something similar to the previous games.

Mass Effect: Andromeda comes out to the PlayStation 4, Xbox One, and PC platform on March 21 in North America and March 23 in Europe. Check out the gameplay trailer from CES 2017 below.