Mind-Full Gaming: What Is A Video Game? 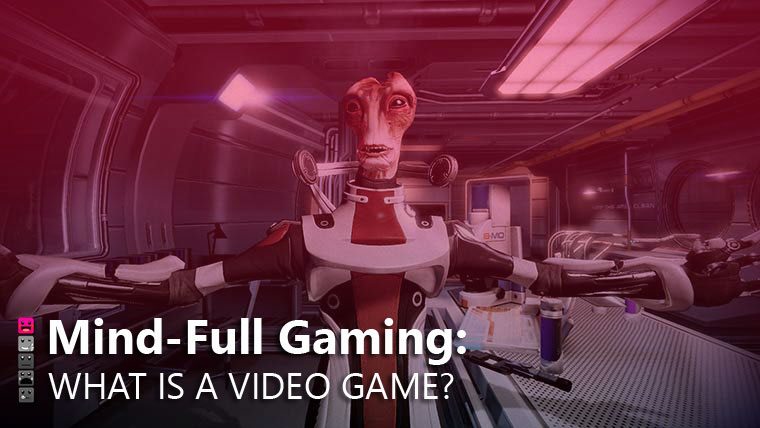 Hello, fellow gamers! I’m Saxy, and this is the introductory article to a new article series I’m writing called “Mind-Full Gaming.” In these articles, I plan on discussing the psychological and sociological aspects of the gaming industry. WHOA, BIG WORDS. Yes, I use big words, so be prepared. And no, I’m not insulting you guys. Regardless of what others may believe, I think gamers can be pretty intelligent people. But I digress. What does this series address? I’m talking about how our minds psychologically, and our society sociologically perceives and affects the game industry. So let’s get down to business.

So, where’s the best place to start? Well, first off, let’s ask ourselves: What is a video game?

Webster’s Dictionary describes a video game as, “an electronic game played by means of images on a video screen and often emphasizing fast action,” and there are countless books, articles, websites, and other forms of media that talk about what a game is in a technical sense, this site included. However, this doesn’t really address the question I’m asking. My question is: “what is a video game to us?” That is a question that’s very difficult to pinpoint an answer to, as everyone has different explanations, definitions, and perceptions on what a video game is. There are so many things that make up a video game that it’s impossible to find one single characteristic that is universally accepted by everyone as to what makes a video game. An exact definition cannot be accurately reached to this question, so why would I ask this question at all? Simple, I’m not looking for an answer for myself; I’m looking to explain it to you through a different light entirely: through the human perspective.

Just what do I mean, “the human perspective?” Simple! I mean the way that the human race looks at video games, both mentally and culturally. Now, it seems monumental in scope, but I’m going to cut this into specific, smaller parts. I could never write one article on how the human race looks at games, it would take up multiple books, all dependent on geography, socioeconomics (another big word), culture, and everything in between. So, instead, what makes a “game” is going to be one of the many subjects of this series, which will take a decent amount of time to complete. Hopefully I’ll be done before college is over, but who knows?

Games have become a talking point for the younger generations

So for now, I’ll leave this question unanswered, but instead of cutting it off here, I’ll put my two cents in (well, really 1 cent, since I’m going to cut it short).

A game is something we play to enjoy ourselves (at least I hope that’s why you’d play a video game). However, a game represents so much more. A game has become a talking point for the younger generations. It’s become a way of life for some people, and a pastime for others. Some are casual, some are hardcore. But there’s something that unites every game: the wanting to have fun. A video game, at its core, is still a game, and a game is meant to be enjoyed. From the early days of Pong, arcades, and the Atari, to the modern consoles, graphics, and games, fun has been the basis of gaming. There’s are some games people love, and others people hate, but there will always be games that can unite groups of people together for the sake of fun. To me, and probably to many of you, a video game is fun, and I think that’s something that will continue for as long as video games continue to exist.

I hope you’ll keep tuning into these articles so that we can take on this journey into the games industry’s psyche together, and maybe we’ll all learn more about ourselves in the process. This is Saxy, and let’s keep gaming.

Home / Game News / Mind-Full Gaming: What Is A Video Game?