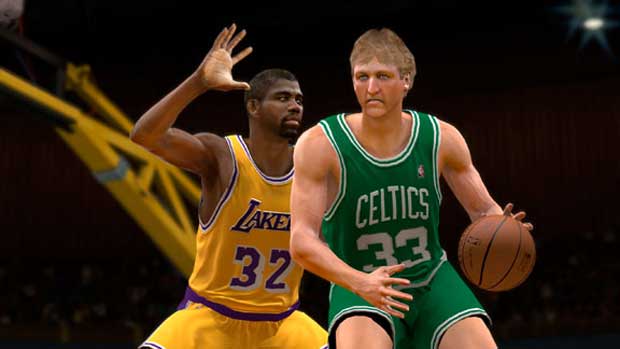 In NBA 2K12 you will be able to recreate some of the most intense hardcourt rivalries that the world has ever witnessed with the inclusion of the all new “NBA’s Greatest” mode.  You can relive classic matchups of 15 historic NBA teams which include the likes of Magic Johnson, Larry Bird, Kareem Abdul Jabbar, Michael Jordan, Julius Erving and more.

With no need to merely discuss these great teams and players from the past, you’ll be able to take it to the virtual court to settle the score once and for all in NBA 2K12.  It’s not awfully surprising that 2K Sports has gone down this road for this years edition of the game.  Last year, which featured a career highlight mode for the Chicago Bulls great, Michael Jordan, paved the way for this NBA’s Greatest mode, as last years installment was a huge sucess. It will be interesting to see how these teams are incorporated into the online modes for the game, and whether you’ll be able to take it online, or whether it will be an offline only mode.

NBA 2k12 has had historic players in the game in the past as part of legendary all-star teams, but full lineups of classic teams from the past will be an interesting twist, especially considering the looming NBA lockout.  2K has commented on the roster updates and the potential effects that the stalled labor talks might have.  If in the case that no real NBA season is played this year, the players will keep their statistics and attributes throughout the whole course of NBA2K12’s life.  Instead of the roster updates that fans of the franchise are accustomed to.

Check out the trailer for the updated greatest mode below.