The latest news in the world of video games at Attack of the Fanboy
October 13th, 2014 by Kyle Hanson 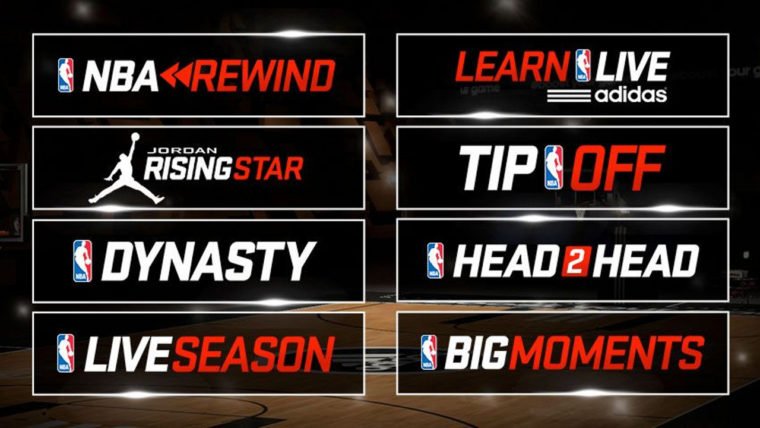 EA Sports is slowly lifting the current from NBA Live 15 and revealing more and more info about the game. Today we get a dully detailed list of every game mode available to players. These include returning classics and some new modes that are sure to please long-time fans. With over 20 game modes to choose from NBA Live 15 is sure to have enough variety for anyone to enjoy.

EA Sports gives a little jab to their competitor NBA 2K15 by saying “With EA SPORTS’ best-in-class online technology, players will never miss a beat online with friends and the NBA. Server stability is a top priority for us, and NBA LIVE 15 will certainly deliver the goods #LIVEallSeason long.” Two modes are shown here:

This mode lets you create “your dream NBA player” and take him from his rookie season all the way to “legendary status”. This year’s offering features a number of improvements including enhanced create-a-player mode, new presentation, new in-game performance grading, and improved draft logic.

This fan favorite mode is said to be “bigger and better” than ever with new challenges, features, and ways to play. Jump-in EA Rewind will allow you to dive into a game at any point, down to the minute, and start playing with accurate stats, lineups, and player tendencies. Hot Spot Challenge tasks you with hitting a shot from every place on the court that a player or team did in an actual game. Finally, Big Moment Challenges let you relive key moments from actual NBA games and rewrite history as you see fit.

“Get familiar with the controls and movement in NBA LIVE 15 with the brand new adidas Learn LIVE gym.

The NBA LIVE team listened to fan feedback from last year, and wanted to make sure players got a feel for the controls before hopping into a game.”

NBA Live 15’s Dynasty mode lets you take a team from the bottom to the top, building them the whole way. “In addition to the on-court action, you can also trade, set goals and manage your squad exactly how you want over a 30-year term.” This year’s entry is said to be “more flexible than ever” with lots of options to let you manipulate time. To see all the details about this mode click here.

Only one mode is left to be detailed, Live Ultimate Team, but EA Sports is holding that info for later. check back here for any future updates. NBA Live 15 will be released on October 28th for PS4 and Xbox One.