Update: A new video on the Pokémon YouTube channel confirmed that Lycanroc will have its own Z-Move, but it will be called Splintered Stormshards. The move will inflict damage and remove Terrains. The video also stated that the event Rockruff will only evolve into Dusk Form Lycanroc, implying that it will evolve into Dusk Form Lycanroc at level 25 regardless of the time of day. The original article is below.

Yesterday (September 12), there were some leaks of CoroCoro magazine pages that revealed some information about the new forms of the Legendary Pokémon Necrozma that will appear in the upcoming games Pokémon Ultra Sun and Ultra Moon. Today, it appears as though there has been another CoroCoro leak, this time giving details about the previously announced Dusk Form of Lycanroc. 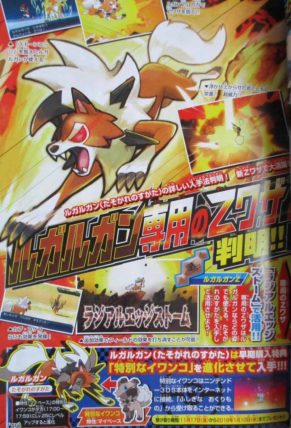 Lycanroc’s third form, its Dusk Form, was announced earlier this year as a new form not in the original Sun and Moon games. When the new form was revealed, it was also announced that the only way players could attain it was through receiving and evolving a special Rockruff via Mystery Gift event that will occur for the first couple of months that Ultra Sun and Ultra Moon are out. These new leaks seem to give more specifics about how to evolve this special Rockruff once it is obtained through Mystery Gift.

According to Serebii.net, the leaked CoroCoro page states that the special Rockruff that will be distributed through Mystery Gift is unique in that it has the ability Own Tempo, which Rockruff cannot normally have. Once the player receives this special Rockruff, they will have to raise it to level 25 during the specific time period between 17:00-17:59 (5:00PM-5:59PM) in in-game time. Upon meeting all these conditions, the Rockruff will evolve into a Lycanroc in its Dusk Form.

The page also states that Lycanroc in any of its forms will have access to a Lycanroc-exclusive Z-Move called Radial Edge Storm, which eliminates Terrain effects as well as causing damage, if Lycanroc knows the move Stone Edge. Pokémon Ultra Sun and Ultra Moon are scheduled to release on November 17 for the 3DS.