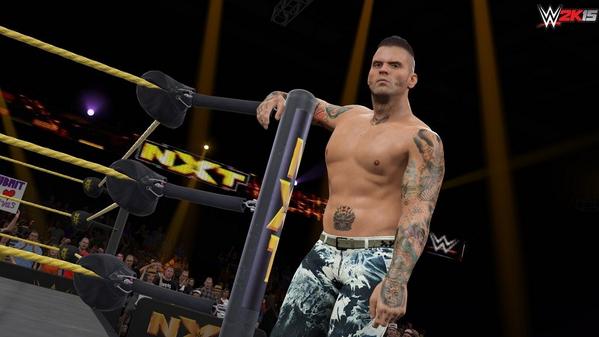 2K Games has released some new WWE 2K15 screenshots that take a look at the numerous NXT Superstars that are in the game.

The screenshots mainly focus on Corey Graves. Graves has been on NXT for many years and it’s good to see him have his video game debut in WWE 2K15. His character model looks very realistic as they have animated all of his tattoos properly. Players are sure to encounter him in the game’s MyCAREER mode.

The WWE 2K15 screenshots also show some of Sami Zayn too. Much like Graves, he’s been on NXT for a while now but hopefully he will be on the main roster one day. There is also a solo new screenshot of Adrian Neville. This screenshot of Neville is cool because it gives us a closer look at the NXT Title. Much like the wrestlers themselves, the belts in the game look very accurate in this year’s game too.

As it was announced a month ago, NXT will play a big part in WWE 2K15. Players will go through NXT in the MyCAREER mode. After graduating from NXT, you will go on to the main roster in hopes of becoming one of the greatest WWE Superstars of all time.

Check out all of the screenshots by clicking on the arrows.