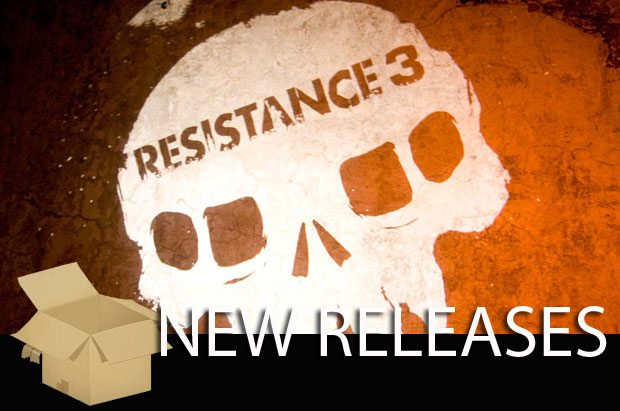 The latest video game releases for the week of September 5th, 2011.

Resistance 3 – (PS3) – Resistance 3 is the 2011 release in Sony’s flagship Resistance First-Person Shooter game franchise for play exclusively on PlayStation 3. Picking up right where Resistance 2 left off, players follow the adventures of Joseph Capelli — introduced in the previous game — in a desperate effort to turn the tide against the ever-strengthening Chimeran horde. Features include: PlayStation Move support, a large and strategic weapons arsenal, smarter and more agile Chimeran enemies and deep multiplayer options including co-op online and offline as well as progression based 16-player online multiplayer.

Blood Rayne: Betrayal – (PSN, XBLA) – The original video game femme fatale, Rayne, has returned to battle and feed in a brand new hack ‘n slash adventure. Slay ghastly enemies as Rayne, the sexy dhampir with superhuman strength, speed, and agility, recruited by the vampire hunting Brimstone Society for one last mission. The target is a lavish, yet sinister ball in a secluded castle with plenty of dark and gruesome surprises. With the help of a mysterious friend, and members of Brimstone, Rayne must infiltrate the manor, take out the fiendish horde, and stop an evil master plot once and for all.

Dead Island – (PS3, Xbox 360, PC) – The island of Banoi is a lush, tropical paradise in the South Pacific where its flagship Royal Palms Resort serves as the ultimate getaway for vacationers with money to burn. However, all good things must soon come to an end – and the picturesque resort falls into madness, carnage and chaos after a mysterious and contagious zombie outbreak claims its once peaceful atmosphere. Cut off from the rest of the world, only four individuals who strangely find themselves immune to zombification have the power to protect the remaining survivors from the horrors of the island, to discover what’s really going on and find a way to escape before their own fatal ends.

Disgaea 4 – (PS3) – This latest incarnation of the popular Disgaea strategy RPG series boasts major graphical improvements, Disgaea’s most in-depth gameplay yet, everlasting value, and the great sense of humor you’ve come to love. The new graphics engine truly brings Takehito Harada’s characters to life with fluid animations and high definition details. Create your own political party and take advantage of a slew of new battle and strategic features expanding upon the already staggering replay value. Finally, Disgaea 4 adopts an all new map-generating mode, enabling players to create and share custom maps with other players around the world! You can even design your own pirate ship to attack them with! Beware!

Driver: San Francisco – (PS3, Xbox 360, Wii, PC) – He’s the most ruthless crime lord to ever prowl the streets of the City by the Bay. His name is Charles Jericho, and he certainly did not bring his heart to San Francisco. Now the fate of the sunny city rests in the hands of one man: a detective, a hero, a Driver. John Tanner has put hundreds of criminals behind bars and chased injustice out of many a city, but this mission poses a threat like no other — and could be his last. Step into the driver’s seat as the hardened detective and get ready for a relentless manhunt that could end either with the restoration of justice or the setting of the sun on the Golden Gate Bridge forever.

Rise of Nightmares – (Xbox 360) – Rise of Nightmares is a single player Survival-Horror game exclusive to Xbox 360 that brings truly mature gameplay to the console’s Kinect Sensor* accessory for the first time. Utilizing the Kinect Sensor’s unique motion capture technology, the game allows for completely controller-free gameplay in a spine-tingling game environment filled with fearful anticipation, terror and of course, zombies. Additional features of the game include: a gripping storyline, dozens of melee and bladed weapons.

Warhammer 40K: Space Marines – (Xbox 360, PS3, PC) – Warhamer 40,000: Space Marine is a third-person Action Shooter in which players accept the role of a Space Marine Captain tasked with the defense of the empire as well as humanity against the Chaos Faction lead by the ruthless Ork hordes. Players will have to use their exceptional size, strength, armor, weaponry and fighting spirit in order to succeed. Features include: a new seamless combat system allowing equally for ranged and melee action, hordes of deadly enemies of various kinds, intense 16-player online multiplayer and more.

Air Conflicts: Secret Wars – (PC) – Air Conflicts: Secret Wars is an arcade flight game with battles spanning both World Wars, featuring seven campaigns and 49 missions that engage players in white-knuckle air battles and secret missions across Europe and North Africa. An impressive selection of famous aircraft of the era is available to the player, each showcasing specific strengths and weaknesses in the battle for air supremacy.Air Conflicts: Secret Wars – challenges players with an exciting mix of mission types, including – patrolling, sneaking/stealth, hit & run, bombing and escort objectives. Mission objectives are presented in an animated, graphic-novel style format as cockpit chatter keeps the game lively and fun.

Starfox 64 3D – (3DS) – Star Fox 64 3D is a handheld Action-Space Shooter game exclusive to Nintendo 3DS that sees the return of the canine space pilot, Fox McCloud. A port of the Nintendo 64 classic, Star Fox 64, Star Fox 64 3D blends the best aspects of the original console game with new 3DS based play options. Features include: all your favorite characters from the Star Fox team, a graphical update that utilizes the 3DS’ two screens, a Nintendo 64 control scheme as well as one that uses the motion-sensing abilities of the 3DS, the ability for players to import their images into the game via the 3DS’ camera functionality and 4-person local wireless multiplayer that only requires one game cartridge.

Driver: Renegade – (3DS) – Tanner is back and full of rage in the new Driver Renegade for the Nintendo 3DS. Driver Renegade takes place between the stories of Driver 1 and Driver 2. After years of undercover work for the NYPD, John Tanner leaves his badge and takes protection under Senator Ballard to take care of crime in his own way. As a renegade, Tanner cleans up the New York streets and punishes those that oppose him. Driver Renegade brings non- stop 3D car chases to the Nintendo 3DS system.