The latest news in the world of video games at Attack of the Fanboy
October 16th, 2014 by William Schwartz 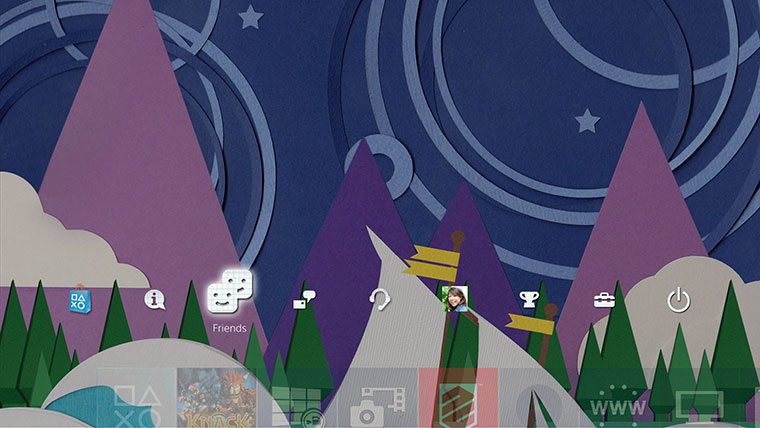 PS4 owners will be getting a major system update in the coming weeks, that adds a host of new functionality and style to the system. Share Play, YouTube Support, and the now confirmed Custom Themes for the console headline the long list of changes.

A list of features coming in PS4 System 2.0 can be found below, courtesy of the PlayStation Blog.

USB Music Player: PS4 owners can play their own music in the background while playing a game using USB Music Player*. After inserting a USB stick loaded with music into the PS4, a new option for USB Music Player will appear. Supported filename extensions include MP3, MP4, M4A, and 3GP.

Change colors: In addition to the ability to add a theme, PS4 owners can also change the background of the home screen from light blue to one of seven new colors: gold, blue, red, green, purple, pink, and gray.

Players You May Know: PS4 will now suggest players you may know in the ‘What’s New’ section, recommending gamers your friends frequently play with.
Enhancements to Live Broadcasting: Masamune brings a variety of improvements to live broadcasting on PS4. In the Live From PlayStation app, PS4 owners can now select a Featured channel, which includes official broadcasts from PlayStation, broadcasts from people on a players friend list, and any game channel that the player has followed. Additionally, Live From PlayStation now has filters for searching broadcasts on a specific game, as well as support for archived broadcasts.

Content Area and Library: PS4’s Content Area, which shows the latest games and apps a PS4 owner has used, has been redesigned to help make it easier to quickly find and access content. It now shows 15 of a player’s most used apps or games, and additional items will be added to a player’s Library. The Library on PS4 has improved filter and sort functions to help organize contented by type (game / app / TV & video), name (a – z or z – a), recently used, or install date.

Enhanced Voice Commands: The ability to control PS4 using voice has been improved. Players can now say ‘PlayStation’ to begin commands, and ‘All Commands,’ to see a list of all voice command options available. New voice commands were added for live broadcasting, including “Start broadcast,” “End broadcast,” and “Find face.”

Add To Library: The monthly free PlayStation Plus games will have an ‘Add to Library’ button in the PlayStation Store. This button will add a game to a PS4 owner’s library without downloading it – saving space on their hard drive.
Back Up Data: Data on PS4 can be backed up and resorted using USB storage. This will back up all data for the console, including settings, save data, screenshots, video clips, download data, and more.

Codnaming the PS4 update 2.0 “Masamune”, Sony did not reveal when to expect a release date for the new features.

See more screenshots of PS4 Update 2.0 on the next page