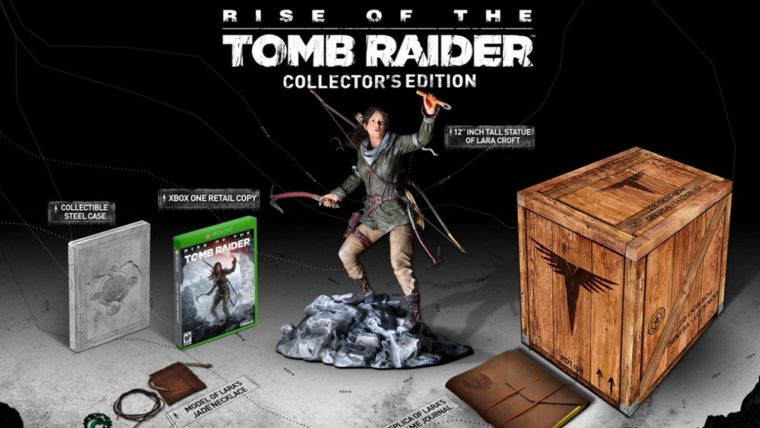 Square Enix has revealed the Rise of the Tomb Raider Collector’s Edition, giving fans a bunch of physical goodies to collect and enjoy. The special edition of the game will hit on the same day as the regular version, November 10th, and will be exclusive to the Xbox One, at least until next year.

The contents of the Rise of the Tomb Raider Collector’s Edition include: a full retail copy of Rise of the Tomb Raider, a 12”-tall statue of Lara Croft which depicts her searching for answers on her first Tomb Raiding Expedition, a Collectible Steel Case, crafted with the symbol of an artifact, a replica of Lara’s leather in-game journal, and a model of Lara’s Jade Necklace, including the pendant that was her first archeological discovery, and the strap that was given to her by Conrad Roth, her late mentor.

Currently the set is only offered on the official Square Enix store, and it is only available on Xbox One. This means, if nothing changes, it will not come to Xbox 360. PC and PS4 players already have to wait an extra year for the game to hit those systems, and they likely won’t get the Collector’s Edition at that time either. However, that could change in the lead up to those releases.