Rumor: Apple and Valve collaborating for a new console? 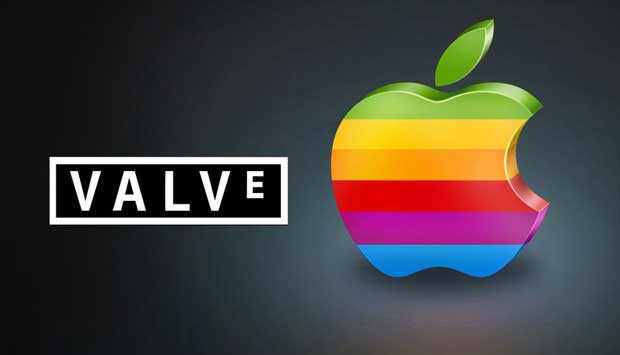 It’s no secret that Apple has been slowly and steadily infiltrating the video games market over the past several years. Devices like the iPhone and iPad have become a relatively unforeseen platform for indie developers and publishers as they can utilize the deeply integrated iOS software to release games to a mass audience for a cost-efficient price. The success Apple has seen throughout its games division over recent years has undoubtedly sparked the company’s interest in producing a full-fledged gaming console that would compete with the likes of Microsoft and Sony as a complete home entertainment system. A rumor emerging from Cult of Mac may indicate that Valve is expressing interest in helping that vision come to fruition.

An unconfirmed report surfaced yesterday stating that Apple CEO Tim Cook was spotted at Valve’s headquarters in Bellevue, Washington. It has been rumored throughout the past year that Apple is currently working on a television set with an iTunes-integrated touch screen remote and Siri-like voice command technology. The report goes on further to claim that Apple’s television set will come with an “Apple-branded, Kinect-like video game console.” The interface will rely heavily on motion and touch controls.

It was also reported just a few days ago that Valve is seeking engineers to work on a mysterious hardware project. While the job listing could logically call for personnel related to Valve’s “Steam Box” project (hardware that would essentially allow console gamers to enjoy PC titles without the need for a high-end PC), there’s of course always the possibility that Valve is looking to directly participate in Apple’s efforts to get in on the home-console race.

According to the job listing, “The ideal candidate should have at least four years of experience with hardware prototyping, circuit simulation, high-speed serial interfaces and system level design.” The listing further reads:

“For years, Valve has been all about writing software that provides great gameplay experiences. Now we’re developing hardware to enhance those experiences, and you can be a key part of making that happen. Join our highly motivated team that’s doing hardware design, prototyping, testing, and production across a wide range of platforms. We’re not talking about me-too mice and gamepads here – help us invent whole new gaming experiences.”

If the reports are in fact confirmed, this would not be Apple’s first venture into the console-gaming business. They had a rather forgettable endeavor back in 1995 with the creation of the “Bandai Pippin.” Although the Pippin had a couple of interesting facets including the fact that Mac computers could play Pippin discs, the console came with a full keyboard and optional wireless controllers, and that you could even connect a printer to it, the Pippin fell flat on it’s face. Mainly because it was priced at an absurdly high $600 at launch and it had a very poor games selection while attempting to compete with Nintendo, Sega, and Sony, all of which already had distinct and identifiable franchises at the time.

It’s worth noting that the report is purely speculation at this point. Stay tuned for more updates.