Rumor: Diddy Kong Racing 2 In The Works For Wii U 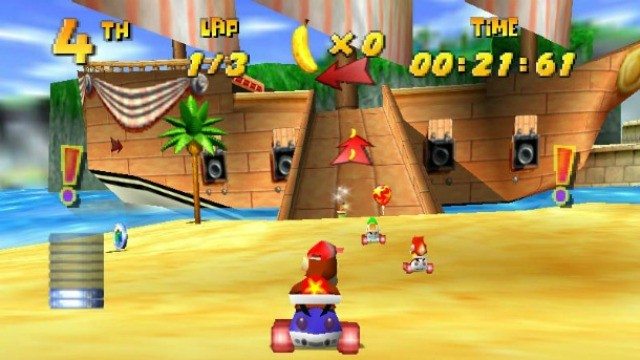 If you owned or at least played a Nintendo 64 back in the day, you’ve likely at least heard of Diddy Kong Racing. This extremely underrated racer took your typical racing game, but gave it an overworld to explore between races. The game was also ahead of the curve by also allowing hovercrafts and planes as vehicles, way before Mario Kart was taking leaps to other vehicles outside of basic karts. Sadly, with the acquisition of Rare by Microsoft, the series has been dead in the water for a good while now. However, some major rumors have surfaced about a previous attempt to revive the series as well as one that is in the works right now.

Kevin Callahan, a gaming journalist with connections, has his own blog where he posted some very interesting Diddy Kong related tidbits. The first of these is that following the release of Excite Truck for the Wii, Nintendo approached the game’s developer, Monster Games, to possibly bring the series back to life on the Wii. He says that the Donkey Kong series was struggling on both the Gamecube and Game Boy Advance, so they were hoping to revitalize things with a sequel to Diddy Kong Racing.

At this point, Monster Games began brainstorming ideas to try and set itself apart from Mario Kart, including the idea to possibly have transforming animals as vehicles. There were even reports on the gaming messageboard NeoGAF that 20 employees Monster Games was working on a secret game in 2008 that had been in the works for two years and was soon to be revealed.

However, Callahan says things fell apart following the failures of Donkey Kong: Barrel Blast on the Gamecube and the remake of Diddy Kong Racing on the DS. In addition, they had trouble acquiring the rights to many of the characters they wanted to get for the game. Diddy Kong is obviously a property of Nintendo, while many of the other characters in the game, such as Banjo, Timber, and Conker belong to Rare and therefore Microsoft now. In the end, this game is said to have become Excitebots, which followed an animal theme that was more broad than the animal buddies idea from the Donkey Kong Country series as originally planned in the new Diddy Kong Racing.

This all brings us to the big news that Diddy Kong Racing 2 may be in full production as a collaboration between Monster Games and Retro Studios. Rather than announcing at E3 this year and taking away the thunder from the recently released Mario Kart 8, Callahan says it will be announced in 2015 for a release the same year. The game is said to be produced by Kensuke Tanabe and will include the idea of animal based vehicles playing a major part, with a hub world just like the classic.

These could all be false rumors, but there seems to possibly be something here and I’m holding out hopes that this is true. I absolutely adored Diddy Kong Racing and would love to see it return in the near future.

Home / Game News / Rumor: Diddy Kong Racing 2 In The Works For Wii U