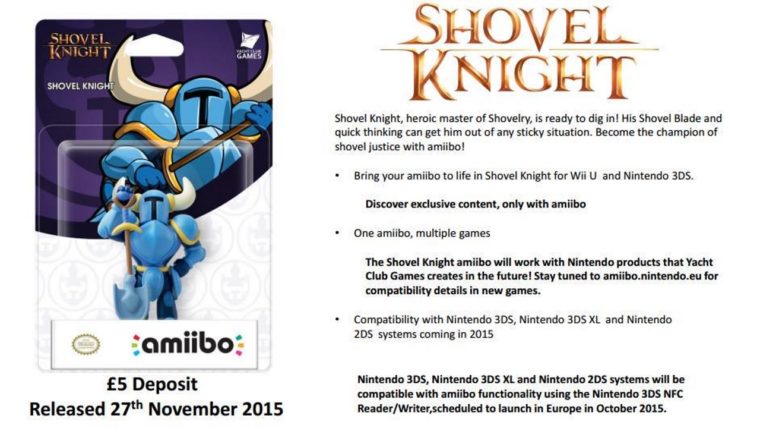 UPDATE: Nintendo and Shovel Knight developer Yacht Club Games have officially announced the figure that was leaked earlier. The figure will be its own separate line of Amiibo, not occupying the Smash Bros. series. It will unlock co-op multiplayer within Shovel Knight, along with some extra goodies.

The popular video game store GAME UK has seemingly leaked the existence of a Shovel Knight Amiibo, which will likely be officially announced tonight by Nintendo. A tweet was sent out earlier today from the store’s official Twitter account saying “JUST ANNOUNCED! A Shovel Knight amiibo. It’s out Nov 27th, you can preorder in store with us from tomorrow!”

That tweet has since been removed, but the info it provided seems fairly legitimate. We now have high res images of the figure and its packaging, which seems to confirm that we’ll be seeing it later on.

This also plays into the rumor from earlier that said the Shovel Knight character would become a fighter in Super Smash Bros. for 3DS and Wii U. We already know that any character that appears in the fighting game will eventually have an Amiibo made for them, so this all adds up to big news for Shovel Knight fans.

This is also big news for Nintendo, showing some pretty amazing support of independent game developers. Indie games have become a bigger and bigger part of the gaming industry these last few years, and while consoles have done a lot to push them, they still lag behind in some areas. If this all turns out to be true, this is a big step forward for Nintendo and Yacht Club Games.