How to Survive until ‘Mass Effect 4’ If, like me, you hunger for more jaw dropping shootouts, witty Seth Green lines and emotional cutscenes from the Mass Effect universe, then you too will be struggling with how to quench this thirst (It was a hunger, now it’s a thirst). Whatever you want to call it, Mass Effect 4 is a long way off, and it’s going to be difficult to fill the void until it’s Arrival, (get it?) hopefully in 2014.

Anyway, if you’ve gotten this far, I’m sure you’ll have noticed I’m somewhat of a Mass Effect fan. Sorry, fanboy (cue awkward silence and tumbleweed). Hopefully you are too, but maybe you just have a normal level of interest in ME4, which is fine, or maybe you’ve just arrived here because you know I’m going to talk about Minecraft in a minute, which is okay too. If you don’t fit into any of these three categories, I’m sure you’re just as confused as to why you’re here as I am, so let’s just get to it.

There are two obvious answers that most people will think when asked ‘How will you survive until Mass Effect 4?’. Most will either bide their time by buying a next-generation console or replaying the original Trilogy. Sure, you could buy a PS4 or Xbox One and lose endless hours to all the shiny new games coming out, which most will do and I’m by no means insulting as I’ll do the same. But that’s just distracting yourself from the need for Mass Effect-y goodness. (Yes, I’m aware of how stupid I just made myself sound, be quiet.)

Equally, making a new Commander Shepard and starting the trilogy from scratch could be used to whittle away the time before Mass Effect 4, but there are two less obvious, brand new ways to get your ME fix. 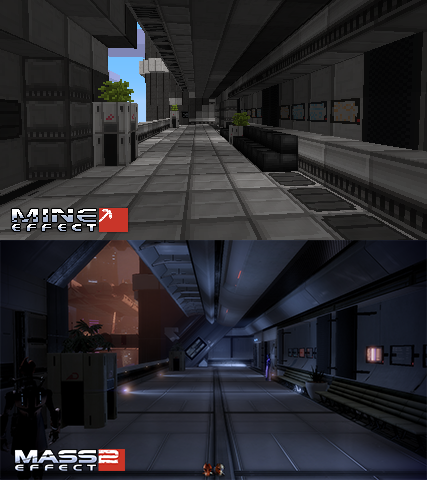 Minecraft for the Xbox 360 will get a Mass Effect Mash-Up pack on September 4th. If you haven’t seen the trailer for it yet, feast your eyes here. For the low price, in my opinion, of 320 Microsoft Points (or $3.99) you can get Mass Effect textures, craftable items and character skins. You also get 22 soundtracks from the Mass Effect universe, and a game save of the Mars Facility.

While I don’t have Minecraft on the Xbox 360, I have played the PC version, and this alone has tempted me to buy the Xbox 360 version of it, just look at the likeness that they’ve created with the screenshot there. To anyone that does own it, this Mash-Up pack will surely offer hours of fun and enjoyment, especially to anyone devoted to Bioware’s frankly brilliant ME series.

Not a fan of Minecraft? Either way, this particular method of getting Mass Effect into your system is aimed more at the hardcore fan anyway. Mass Effect Foundation is a new series of comics published by Dark Horse, written by Mac Walters, Lead Writer on Mass Effect 2 and 3, and available digitally and in print. The first issue of the thirteen part series is available for $3.59 in print, or $1.99 digitally.

What’s most exciting about Foundation is that there are rumors that it will set the stage for ME4. If so, the timeline of the first issue suggests that Mass Effect 4 might be a prequel. This makes it likely that it won’t actually contain a ‘4’ at all, but will probably have a new tagline. Regardless of when the next game will be, it’s worth reading the Mass Effect Foundation series for pure Mass Effect related enjoyment, and it would be an awesome bonus if the lore led up to the next Mass Effect.

Anyway, how will you be planning on spending your time until Mass Effect 4 arrives? Leave a comment with your thoughts below. Equally, if you loved or hated the article, let me know why below.

Home / Game News / How to Survive until ‘Mass Effect 4’