The latest news in the world of video games at Attack of the Fanboy
September 30th, 2014 by Danny Vittore 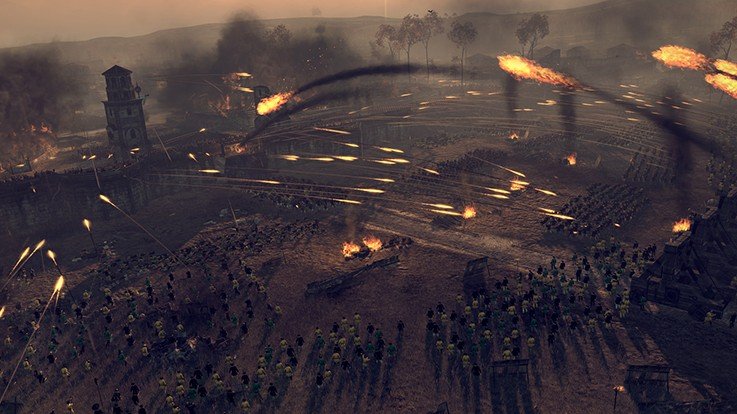 Having not even been more than a year since Total War Rome 2 came out to mixed reviews and on the eve of Creative Assembly’s next game Alien: Isolation, Creative Assembly have decided to lay the announcement of Total War Attila on our lap. Not overly much is known about the game itself, until now. A Gamespot commented demo and a gameplay display at EGX 2014 (which you can watch below, erroneously titled Total War: “Atilla”) have surfaced and have shed a lot of light on what Total War Attila will look like.

Veterans of the Total War series who are, by now, used to Creative Assembly’s shenanigans will quickly realize that this who deal with Attila isn’t too dissimilar to how the Napoleon standalone came out right on the heels of Empire and how Fall of the Samurai cam after Shogun 2. It definitely seems that Creative Assembly is trying its very best to release a Total War game roughly once every one-and-a-half years with every second one being highly derivative of its predecessor.

Total War Attila doesn’t look like it will be bucking this trend any time soon. On the surface, Total War Attila looks like a re-skinned Rome 2, which is totally what it is. However, don’t let that fact make you think any less of it. Even Medieval 2 was basically a highly modified version of the first Rome and that turned out pretty great! On one side, you can see this as an attempt to sell us the same game in different clothes or you can see this as Creative Assembly trying to learn and fix their mistakes (although I’m sure many of us would have preferred they fixed them directly in Rome 2).

From what we can see of all the pre-alpha gameplay available, it appears that Creative Assembly has really cleaned up the visuals, especially on the campaign map, but otherwise, there isn’t really too big of a difference between Attila and Rome 2. However, gameplay-wise, there have been some significant changes. Most notable is the return of the family tree that many long-time players of the Total War series have been pining for. It seems that the family tree has been integrated with the whole political part of the game, which was extremely lacking in the original release of Rome 2, so it’s good to see that they are putting some more thought into how it will work.

Trees really seem to be the key with Total War Attila. Now, the overhead map (which is completely necessary because of how bloated the campaign map has become) now supports multiple different overlays, one of which shows where the significant forests and mountains are, which give you a better strategic view. Tech trees and skill trees have been revised as well with the doing away with the card system that was found in both Shogun 2 and Rome 2 to a much more sensible skill tree and two large tech trees (civil and military) as opposed to the many small ones we found in Rome 2.

There have been some noticeable minor gameplay additions as well. In a defensive siege battle, you can now place barricades that can help you fight your street battles more effectively. Perhaps you have no interest in defending a city? You can now abandon it, which gives you a one time influx of cash, but also desolates the whole region affecting fertility of the lands and destroying all buildings found within it. Such a tactic can only add more options to a campaign, although one can imagine how annoying it can be if there happened to be an AI opponent who liked conquering your border towns and immediately abandoning them, creating many desolate wastelands for you to reclaim.

Total War Attila is set to come out sometime in 2015 for PCs and probably for Macs as well a few months after the release for PCs.

What are your thoughts on Total War Attila? Do you think it’s the right direction or the wrong? Let us know in the comments below!