Twitch are cracking down on protecting copyrighted music in any of their Video On Demand services, as announced recently on their official blog. In order to do this, they have partnered with Audible Magic, who work closely with the music industry. The technology will scan past and future VODs to identify music owned or controlled by clients of Audible Magic, including in-game and ambient music.

When content is detected and flagged, that portion of the VOD will be muted, with volume controls turned off. Past Video On Demand will still be exportable, but will also be muted. The scan will happen in 30 minute blocks, and if any 3rd party music is found, that entire 30 minute block will be muted.

As per the company release –

“Flagged Content will display an on-screen notification informing viewers that content owned or controlled by a third party has been identified. The progress bar will also be red for the duration of the muted section.”

A screenshot of this in action – 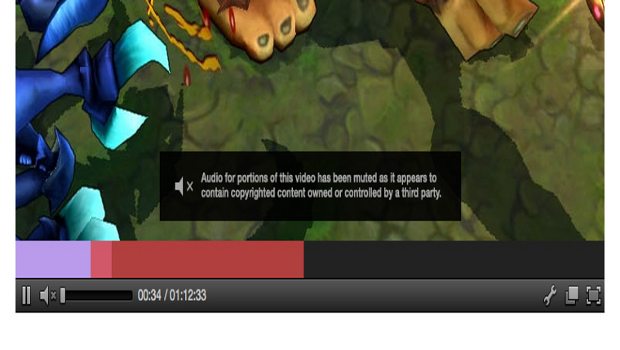 The good news :
This new slamming  down of the proverbial foot by Twitch will only effect Video On Demand. Live broadcasting will not be scanned, muted and taken down.

This move follows just one day after the shutting down of Justin.tv, the pioneer of live streaming video and the catalyst that spawned Twitch.

“Justin.tv was officially renamed Twitch Interactive Inc. in February of 2014 and Twitch is now the focus of the company’s resources. Unfortunately that means we need to shut down Justin.tv. We thank all of our broadcasters and viewers for 7 years of live video memories.”

All this recent movement  lends weight to the rumor that Google reportedly made a $1 billion dollar deal to purchase Twitch. If the rumor is true, the integration of Youtube and Twitch.tv will effectively form the largest video empire we have ever seen; something akin to Alexandria, The Roman Empire or The British Empire in their peak, only in the digital world of today.