The latest news in the world of video games at Attack of the Fanboy
June 18th, 2015 by Damian Seeto 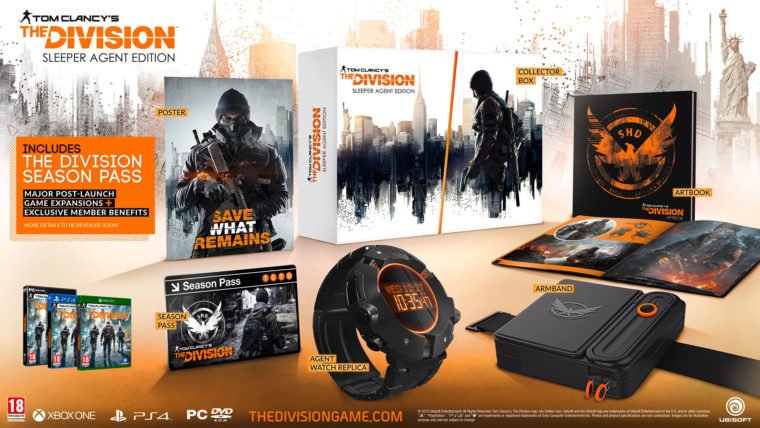 Ubisoft has revealed a special “Sleeper Agent Edition” for Tom Clancy’s The Division.

The Sleeper Agent Edition for The Division has been listed by EB Games Australia. It costs $219.95AUD and you can only buy one. EB Games is not allowing you to buy another for a friend.

The Sleeper Agent Edition for The Division includes:

*Tom Clancy’s The Division game.
*The Agent Watch Replica: fully functional watch which glows like the in-game SHD watches.
*The Agent Armband, a convenient way to carry your most valuable equipment.
*A high quality artbook including concept arts that inspired the game.
*“Save What Remains” Poster
*Exclusive Collector’s Box.
*Season Pass. Includes a full year of major expansions and exclusive benefits.

The part about the Season Pass in The Division is interesting. It sounds like there will be DLC offered for a full year. Ubisoft will not be abandoning the game after three months or something like that.

You can also choose to buy the “Tom Clancy’s The Division Gold Edition” which is basically the game and the Season Pass only. This will be much cheaper than the Sleeper Agent Edition.

If you pre-order The Division, you also get access to the beta too. You also get a “Hazmat Gear Set” that includes other gear for your character.