The latest news in the world of video games at Attack of the Fanboy
July 18th, 2017 by Dylan Siegler 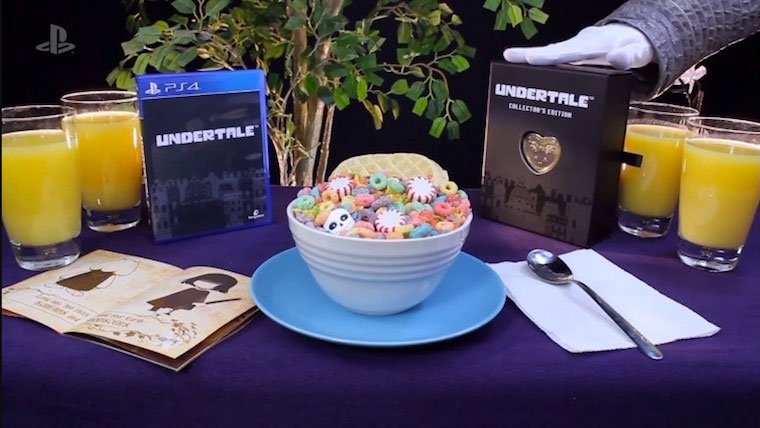 At this year’s E3 in June, it was revealed that 2015’s cult hit Undertale would be coming to PlayStation 4 and PlayStation Vita. Digital pre-orders are now available from the PlayStation Store and physical copies can be pre-ordered from FanGamer.com.

Digital copies of Undertale on PlayStation 4 and Vita will be released on August 15, but if you digitally pre-order the game, you will get a few extra things. Digital pre-orders come with a PS4 Theme that features the Ruins area from the game and plays a newly composed song by Toby Fox, the game’s creator. Digital purchases will also support Cross-Buy, so if you have both a PS4 and a PS Vita, you will only need to buy the game once to be able to play it on both.

For those who want physical copies of Undertale, they will be available exclusively from FanGamer.com. Physical copies will be available for PS4, PS Vita and PC and all physical copies come with an illustrated story booklet by Temmie Chang, one of the game’s artists. Physical copies are $25 or $64 for the Collector’s Edition. Collector’s Editions will also include sheet music of some of the game’s songs, a gold-plated music box locket made to resemble the Heart Locket item in the game and the game’s full soundtrack on two CDs, including two previously unreleased tracks, one of which is the song that plays for the PS4 Theme you get for pre-ordering the game digitally. Pre-orders for physical copies are expected to ship late September.