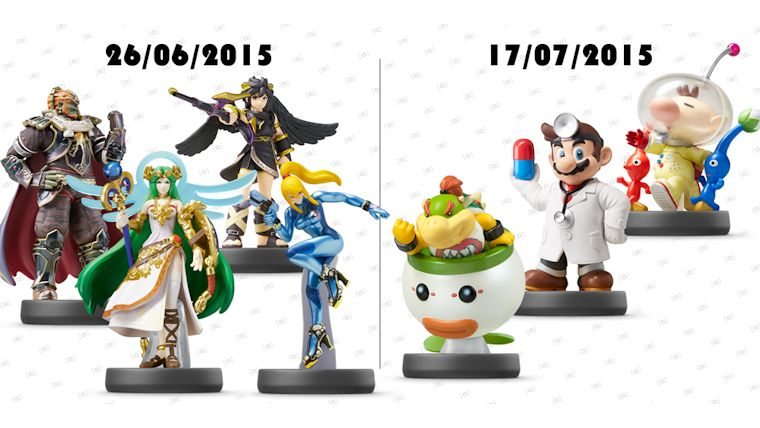 The Wave 4 amiibo may not be out for a few weeks in the US, but they already released a few weeks ago across the rest of the world. Upon the reveal of the US release dates for that wave, we also got the reveal of the Wave 5 amiibo and now they have been officially dated for release in Europe.

Nintendo of Europe used their official Twitter account to tweet an image that shows off the split Wave 5 amiibo and the two dates they can be gotten on in the coming months. The seven figures that make up Wave 5 are split into a group of four and three that are only three weeks apart.

The first batch will come on June 26 in Europe with Ganondorf, Zero Suit Samus, Palutena, and Dark Pit. Three weeks later on July 17 comes Bowser Jr., Dr. Mario, and Olimar. In comparison, the US is seeing a much different split with Dark Pit and Palutena only in July and then the remaining five in September.

The trend of other regions getting each wave ahead of the US continues here, so it is likely pre-orders will pop up for Europe first again as well. If you are in Europe or are elsewhere and looking to import, keep an eye out in the coming weeks in case said pre-orders begin to pop up.