When Will The Wave 5 Amiibo Pre-Orders Go Up?

The latest news in the world of video games at Attack of the Fanboy
June 4th, 2015 by Dean James 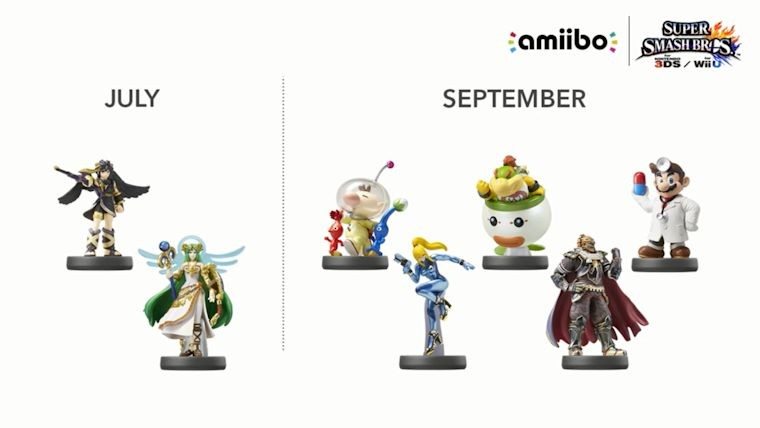 The latest wave of amiibo has come and gone so eyes have already shifted towards Wave 5. This next batch is being split up very strangely, with two coming out in July and five in September, rather than a more even split. This has everyone wondering, just when will Wave 5 amiibo pre-orders open?

The fourth wave was a mixed bag, with the pre-orders being a complete debacle all around, but launch day stock being better than the last few waves, especially on the exclusive front. This might be a sign of Nintendo of America finally getting that there is an amiibo problem and hoping to fix it, but they still are pretty much impossible to obtain for those that didn’t go at opening on day one. Even the thought to be common amiibo like Charizard and Pac-Man are far from readily available.

Even those that lined up last Friday morning likely were not able to complete their collections that morning alone. I luckily had everything pre-ordered except Jigglypuff, Silver Mario, and the Splatoon 3-pack. I had only planned on getting the first two at Target and the other at Best Buy anyways, but those at the front of the line were very disappointed when the manager announced you could only buy a limit of two. This store had at least a few of each Wave 4 amiibo, but due to Jigglypuff being an exclusive, those at the front of the line were forced to make a decision of Jigglypuff and one of the two Fire Emblem essentially. This type of situation is what makes pre-orders all the more essential.

Wave 5a is set to bring Dark Pit and Palutena in July, which will be followed by Wave 5b in September that will have Ganondorf, Zero Suit Samus, Olimar, Dr. Mario, and Bowser Jr. E3 is bound to give us set release dates for each of this through the Nintendo Digital Event, though they could only give us the first batch of Wave 5 amiibo release dates for July.

If the last Nintendo Direct is any indication, they will give us a release date and retailers will start to do pre-orders the following day. GameStop was the first to announce pre-orders through their Twitter in the hours following the April Nintendo Direct, so they could very well be the first again. Of course, everything depends on which are retailer exclusives this time around.

Wave 3 was previously split up into two sub-waves, though those two were only split apart by a few weeks, with different retailers having different release dates across the month of February. This made things much more complicated, but pre-orders were still taken at the same time for each of these anyways.

My best guess would be that we’ll get release dates for all seven amiibo, along with maybe a second Super Mario series line or something else to go alongside the two July amiibo. September may seem like a good ways out, but it really isn’t considering how early pre-orders were done for Wave 3. I doubt Amazon will be doing them after what they did in Wave 4, but other retailers like GameStop and Best Buy are bound to offer them. Then there are of course the potential exclusives that could go up, especially with Target saying they will have another.

Regardless, the Nintendo Digital Event on June 16 should definitely provide us with some answers on a release date with pre-order details soon to follow more than likely.

Home / Game News / When Will The Wave 5 Amiibo Pre-Orders Go Up?