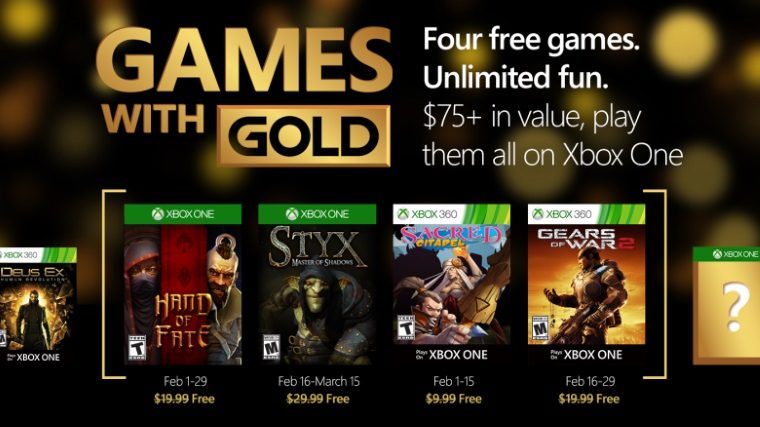 Microsoft has announced the games that will be featured as part of Xbox Live Games with Gold for February 2016. These four game will be free to anyone with an Xbox Live Gold membership, allowing them to download and play them as much as they want while retaining an active membership (except for the Xbox 360 games, which remain on your account permanently). The program is headlined by two Xbox One games, but many will find more interest in the 360 titles this month, thanks to Microsoft fulfilling their backwards compatibility promise from earlierl.

Hand of Fate will kick things off for the Xbox One, becoming free on February 1st and staying there until the end of the month. Styx: Master of Shadows will follow it up on February 15th, running until March 15th. On Xbox 360, Sacred Citadel will be free from February 1st to the 15th, with Gears of War 2 dropping on the 16th and remaining available through the month.

On Xbox 360 the big news is that both titles will be available for Xbox One Backwards Compatibility from the moment they launch. Microsoft had said previously that all Xbox Live Games with Gold 360 games would be backwards compatible, so it’s good to see them sticking to it, and making this month’s offerings available right from the start.

Microsoft and Sony have now both revealed the free games their subscribers will receive next month, so feel free to compare the two in the comments below. Personally, I’m most excited for Helldivers, though if I didn’t already own Gears of War 2 that would be a must play.