Battening down the hatches has never been so fun. 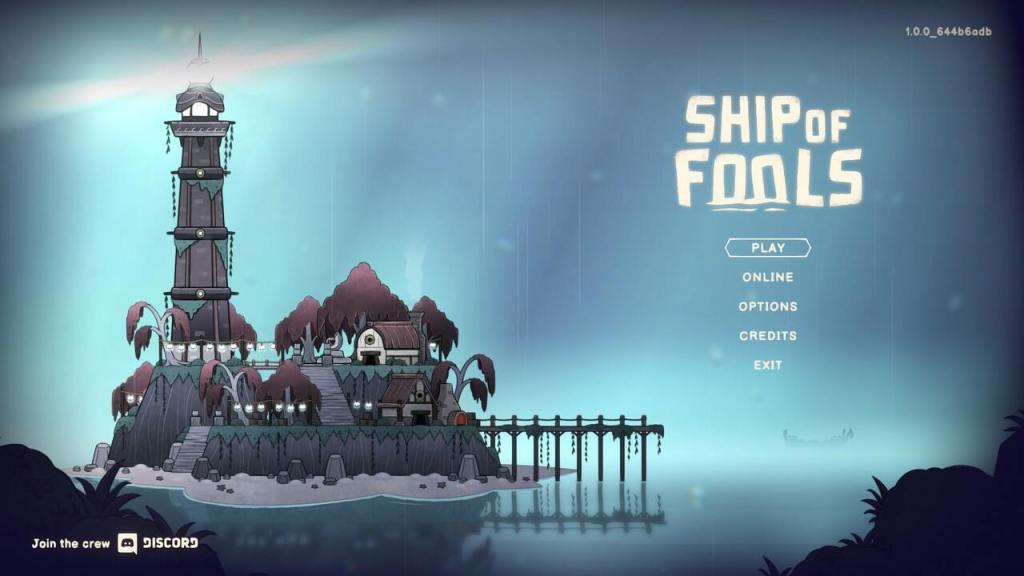 White lightning splits the sky, sheets of water shell the ship, and, looming above you, shadowy tentacles surround your sea vessel. Abandoning the ship is not an option. As you and your fellow Fool man the cannons, you send one final sea shell shot right into the Shadow of the Undergrowth’s mouth. The tentacles wriggle and vanish into the depths below. You’ve survived the battle — this time.

Ship of Fools is a high-velocity seafaring adventure where you and a friend, or just you and a Sentry cannon, sail into the eye of the Aquapocalypse to end the eternal storm and salvage what’s left. To be reductive, Ship of Fools is if Castle Crashers and Lovers in a Dangerous Spacetime had a baby at sea in a storm.

To give you a better understanding of what this game really is, Ship of Fools is a single-player, two-player couch co-op, or two-player online co-op roguelite where you use cannons to defend your ship through various encounters and boss battles, collect Tendrils to upgrade your runs, and sail further and further, unlocking Fools and saving citizens in the process.

While sticking to simplicity and straightforwardness, Ship of Fools oozes charm and personality, fun and challenge. Although it has its shortcomings, Ship of Fools is an adventure worth setting out on.

Ship of Fools succeeds in many ways. Along with being added to the limited selection of great couch co-op games, Ship of Fools features satisfying gameplay that requires strategic cannon positioning and firing, run-specific collectibles that add variety, and an amazing art style and music score.

The moment you wash ashore in Ship of Fools, the fun begins. After a short tutorial demonstrating how to shoot your cannon, how to reload, and how to harpoon items, you’ve gained all of the mechanical knowledge Ship of Fools has to teach you. You’re now ready to make your own waves.

Ship of Fools’ core gameplay loop is addicting, consisting of encountering enemies, checking out islands, getting better ammo, trinkets, and artifacts, and collecting Tendrils, which is the currency required to upgrade your ship and cannons. As you begin your adventure alone or with a friend, you’ll sail toward the section-specific boss by maneuvering on a hexagonal map with many symbols. Each hex of the map offers an encounter with enemies or an island containing an upgrade or two. The enemy encounters and boss battles are epic and ramp up nicely in difficulty and visual excellence throughout the game.

Aside from gameplay, the art style and music are fantastic. Immediately, you’ll notice how confident and cute the art design is against the curated and catchy music. As you return to each section in your numerous runs, don’t be surprised if you find yourself whistling the tunes while blasting sea monsters away.

Lastly, unlocking all 10 Fools and discovering which ones are the best is a joy. Each of the Fools, the playable characters in the game, have their own unique trinket that can’t be removed or traded. On top of ammo, trinkets, artifacts, and cannons, the Fool you choose to play as can greatly change your playstyle.

Taking on Water – The Stumbling Blocks

While Ship of Fools is excellent in many ways, there are a few stumbling blocks that keep it from being excellent. Namely, the difficult controls and the lack of endgame replayability hold Ship of Fools back.

While I applauded Ship of Fools’ controls for being simple, I didn’t say that they were easy. A common problem for myself and my couch co-op partner, who is an inexperienced gamer, was mistakenly picking up the entire ammo container instead of the handful of ammo you need to reload your cannon. The reason this happened so often is that Ship of Fools uses two extremely close buttons for basically every action. While it does get easier as you learn and use muscle memory, the first few runs of Ship of Fools can be difficult.

My other big complaint is that there is practically no endgame replayability. After beating the game, Ship of Fools feels repetitive despite being able to fight through all four bosses in the game again to get more Tendrils to unlock everything in town. Luckily, Fika Productions has a lot of substantial updates planned for the post-launch of Ship of Fools. We would love to see some updates regarding boss variety, adding challenges like “only use bombs during this run,” or including side quests given by the citizens in town, but for now, Ship of Fools’ enjoyable gameplay can only get it so far.

Keep a Weather Eye Out – The Post-Launch Plans

While the full launch of Ship of Fools is out today, Fika Productions plans to add a lot of post-launch content. So, whether you’ve finished Ship of Fools and want more or are wondering what is behind The Great Lighthouse door, the good news is that Ship of Fools will get better with age thanks to Fika Productions’ dedication and commitment. What is already a great game will only get better.

Though today is Ship of Fools’ official full launch, it does feel like it’s in early access in a few ways. Along with the drawbacks mentioned above, you’ll experience 90% of the game after about 10 hours, which goes hand-in-hand with my criticism of the lack of endgame replayability. Also, there are common roguelite features missing like the ability to pause and continue a run later. I am hopeful knowing that Fika Productions will continue working on Ship of Fools, but not having these features at launch is unfortunate.

Thankfully, performance-wise, Ship of Fools is nearly foolproof. During my many runs through the Archipelago, I experienced hardly any bugs or errors. And if there are any in the game, Fika Productions is sure to iron them out as soon as they can.

Ship of Fools is a very fun game that, to varying degrees, lacks engaging endgame replayability and a meaningful story. However, the fun factor and level of polish alone are high-water marks that will captivate you and draw you into the Eye, of the Storm over and over again.

While the core game has a lot of wind in its sails, the final destination is still on the horizon. Ultimately, Ship of Fools is a cute and genuinely addicting game for new and experienced gamers that will only get better as more content is added post-launch.