Melt your foes with magic using these! 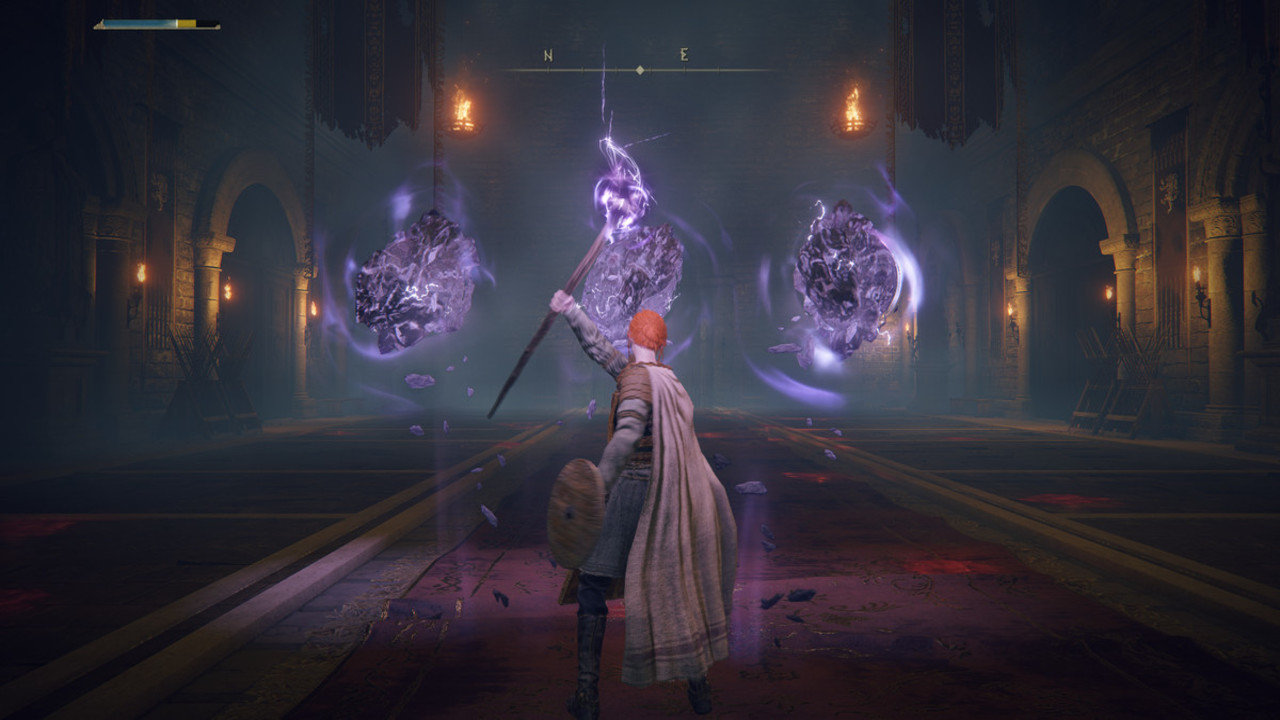 Elden Ring has been out for a month, and players have had ample opportunities to explore the magic and its place in combat for the game.  Glintstone sorceries in particular have been really fun ways to take on enemies, whether they’re bosses, or invading players, and it’s important to know your best equipment to cast them.  To cast the best sorcery, you’ll want to know the best Glintstone Staff for any given situation, as well as those which are viable for a variety if you want to choose one to fully upgrade first.  Here are our Top 10 Glintstone Staffs in Elden Ring! Kicking off our list is the Staff of Loss, which has a reasonably low barrier of entry to use if you’re looking to branch out into magic to supplement other builds.  This staff boasts a C rank on its Intelligence Scaling and even has Dexterity scaling to boot, although it’s minimal but enough to still set itself from other staves which don’t often feature it.  The biggest point in favor of this staff is its boost of Invisibility sorcery, which includes some rather fast meteorite/comet-themed projectiles to quickly dispatch foes. The Meteorite Staff is a special option as it features S scaling off the bat for magic users with another reasonably low Intelligence requirement of 18.  It can get a lot of use in the early to the mid-game with the additional boost to Meteorite sorcery, most importantly Meteorite of Astel or Gravity Well.  The major downside to this staff is it can’t be upgraded unlike many other staves, so the S Intelligence scaling results in a meager boost to sorcery by late-game, unlike other staves which stay viable for more purposes. The Carian Regal Scepter is a powerful staff that requires 60 Intelligence to even use, putting this as the most demanding barrier of entry on the list.  It boosts Full Moon magic, including Ranni’s Full Moon, which is an extremely powerful burst projectile with the ability to inflict Frostbite.  It also inherently has the Spinning Weapon ability, while other staves often have no skills built-in, although you’ll likely never use it.

This weapon has a strong initial Intelligence scaling and can be fully upgraded to be very powerful, but the downside is its boosted sorceries are not FP efficient and slow to cast, leaving the user vulnerable.  But if you have a coop partner, this can be a lot of fun. This staff is incredibly easy to use as it has a very low required Intelligence stat of 10.  It scales well after a few upgrades and can last you through the whole early to mid-game, and you could reasonably take it with you into the late phases although it gets outshined by other staves due to its lack of a special ability.  It is a true workhorse among the glintstone staff arsenal in Elden Ring. This staff, much like the name suggests, is for serious students of sorcery or graduates from Raya Lucaria, with a required 28 Intelligence to use.  Despite this, it has decent sorcery scaling and you start out using this weapon with a B on its intelligence scaling as well.  It doesn’t have any boosted sorceries, but is a powerful conduit for glintstone sorceries and has quite a high threshold, scaling at over 300 sorcery when fully upgraded if you’re featuring a high-intelligence build for late-game. You’ll have to upgrade a tiny bit into this staff at a 22 Intelligence threshold, but it boasts longevity and reaches S tier scaling at only halfway through its upgrade cycle.  It boosts Carian Glintblade sorceries, which are quite powerful and versatile, especially for the ranged and tactical-minded magic-users who fight from afar.  Sorceries boosted include Loretta’s Greatbow and Loretta’s Mastery, as well as the Carian Glintblade Phalanx, and these can be great for inflicting first strikes as well as breaking down the enemies’ poise. Not only is this staff cheap and easy to get if you don’t start with it outright, but it also has a relatively low barrier of entry, scales quickly to S on Intelligence, and can technically still hold up well in the late-to-endgame.  If you’re not primarily a magic user it takes a small bit of investment to use, but it’s among the most versatile, viable staves in the game, which demonstrates how function can still win over specialized gimmicks. This staff boosts Carian Sword-based sorceries which is great as it enhances versatility for magic users who are found in a close combat situation.  One spell, in particular, that is quite good with this staff is Adula’s Moonblade, acquired in an optional fight on your way to completing Ranni’s questline, and it can inflict heavy damage including Frostbite.  The staff is still quite versatile on top of that with reasonable scaling elsewhere, allowing you a multifaceted spell arsenal to cover long to short distances. While it is a demanding staff, falling short of the Carian Regal Scepter for requirements but still needing a mighty 52 Intelligence to wield, it is immediately powerful upon usage.  The biggest tactical advantage of this staff is its reduction of casting time which is a big deal for spells like Comet Azur, but it comes at the price of higher FP cost as a result.  This staff is helpful and powerful in a range of scenarios and can be quite handy in PvP as well as against bosses who try to close in on you, only to be melted by powerful magic first. It really shouldn’t be a surprise that this made the list.  Much like #2 on this list, it requires 52 Intelligence but, in exchange for higher FP costs, every sorcery you cast with it will be more powerful.  This is naturally very versatile, and if you invest a healthy amount of Mind into your build, you’ll have plenty of FP to draw on.  If that wasn’t enough, the staff can be fully upgraded to reach astonishing sorcery scaling, and it makes a difference against even the toughest bosses, but make sure to bring lots of Cerulean Tears.

This concludes our list of Top 10 Glintstone Staffs in Elden Ring!  Whichever staff you choose, you’ll have loads of fun with a visually stunning array of spells to unleash on your foes.  Be sure to check out our guides, and our review!